As of July 1st, new vaping laws in Indiana have essentially killed the industry and access to vapor products for the people within the state.  The ill-conceived plan, intended to create “safety in an unregulated industry” went into effect earlier this week, in essence creating a monopoly for a single security firm within the state and closing down approximately 200 businesses over night. 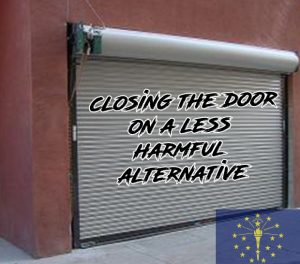 The laws requirement that the security company must have at least one employee who is a certified consultant on architectural hardware such as locks and door hinges, and one who is a certified technician on rolling steel fire doors. The law also states that those employees must have been on staff for at least a year.  As it happens, the only company in the United States that meets those requirements is right there in Indiana,  the second stipulation making it so that even if other security companies wanted to get in on the action they would have to wait 12 months.

Importing e-liquid from out-of-state is also out of the question, as according to the State Government, if it doesn’t meet their requirements, it can’t be sold.  Therefore, that single company was not only given responsibility for e-liquid manufacturers in the Indiana, but also any other State who wants to sell there.

Vape shop owners were told that come July 1st, any e-liquid found on the shelves of vape shops that wasn’t in compliance would be a breach of law.  So, on June 31st, vape shop owners emptied their shelves of anything that could have landed them in hot water and were pretty much left with empty space.

Petitions and lawsuits were filed, the politicians of the state were made fully aware of the consequences of their actions yet they plowed, full steam ahead.  Some claimed that the vaping industry was over stating their case and that the ramifications would be no-where near as earth shattering as they claimed.  Yet as Thursdays deadline to receive permits from the Alcohol and Tobacco Commission passed with only 7 recipients, several prominent lawmakers  made statements that they were now going to push forward and attempt to fix the situation.

Recent media reports about this apparent monopoly are more than a little disturbing…
…While everyone supports oversight and reasonable safeguards on the industry, the legislature should re-evaluate this law and the system it created to ensure greater fairness, competition and transparency.


The law was intended to establish health and safety protections for the public, but if we find that it has inadvertently created unfair disruptions to the market, we will take swift action to address it in the next legislative session.

If he takes a look out of his office door and actually goes into the streets of his State, he will quickly see the “unintended consequences” of those actions.

As it stands, taking swift action in the next legislative session will do little to save the hundreds of businesses that are taking a nose dive thanks to these politicians and their inability to look past the end of their noses.  Every action has an opposing reaction and 9 times out of 10 you have little idea what that will be until it is too late.

While we hope that something can be salvaged going forward, especially since one of the key lawmakers behind this regulation, Senator Ron Alting is now on the record as seeing the error of their ways, most of us aren’t holding out for much.

“I give you my word that I’ll work with the leadership in the Senate, and we’re going to get that thing fixed.. …This was supposed to be about safety in an unregulated industry, not about creating monopolies or anything.

It is a sad day however, when business owners can predict the future with more certainty than those who are in charge of making the world a better place.

For the rest of the nation, however, this should stand as a massive wake-up call.  This law pales in comparison to the FDA’s deeming regulations.  If you want to know what vaping will look like by 2018, take a look at Indiana right now.