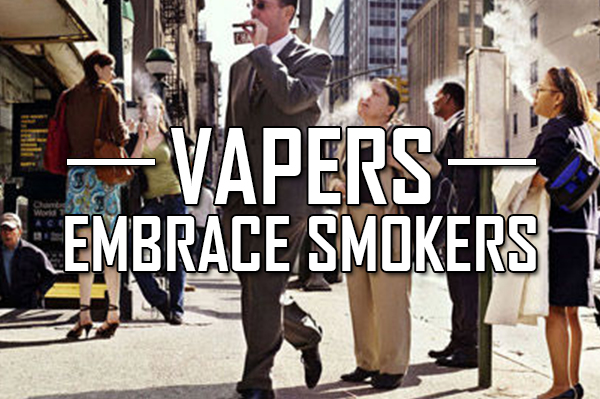 Today I am going to take a few minutes to touch on a subject that has been gnawing at me for a couple of weeks – this is a theme that has been popping up on my Facebook news feed with greater frequency.  As vapers, we should embrace smokers not ridicule them and push them away.

See if any of these scenario’s sounds familiar:

Every smoker mentioned above will now remain just that, a smoker, but this also equates to people using eGo’s or Cig-A-Like’s.  If we go at them with the wrong mindset, they will go back to the cigarettes.

Every Smoker Is a Potential Future Vaper

Our job, as an industry, whether you work in a vape shop or are just a vaper on the street, is to save half a million lives a year by eradicating the smoking of combustible tobacco from the face of the earth, but bullying tactics will not work.  If you are any thing like myself, watching the quit-line commercials on television always made you light up another cigarette, because no one would tell you what to do.  By attempting to push people into vaping, you are doing the same job as those commercials.  Don’t feel bad, until someone pointed this out to me, I was doing the exact same thing.  Every smoker is a potential future vaper, even if they don’t know it yet,  and if we can help them in the right way, they will make the switch.

Don’t get mad at me, they aren’t my words!  Over the last few weeks, a number of well-known vapers have been pushing out this message, talking about the smoker shaming that has been going on, and I have to agree with what’s being said.  From dual users to people using starter kits, the list of attacks are endless.  What another person has in their mouth is, in all honesty, none of your concern… unless that person asks you specifically for your input.

Why The Industry Isn’t Helping

The majority of smokers are unaware that there are independent vape shops in their area, let alone the huge array of equipment we have to play with.  Vapers like you and I are likely the first contact they have with our toys.  If they’ve tried anything, it is the cig-a-like’s from the gas station or maybe a half-ass working eGo.  If we can manage to get them in front of a trained professional, who is in a position to help, they almost immediately put them on the wrong track.  They are looking for something that is like a cigarette, and they’re not interested in massive airflow and how many watts a device can put out.  If I walked into the majority of shops today, I would probably walk away and go back to smoking.  For me personally, it took an eGo Twist with a Kanger tank on the top to quit, with 24mg strawberry e-liquid.  If I walked in today as a smoker, most juice lines don’t go above a 12mg, so I would be screwed.   We need to get the e-liquid manufacturers back on track, helping them remember why they are in business in the first place.  I think every company should offer a liquid with a good throat hit and high nicotine for the simple fact that while we are here, there are others out there who could benefit.  That smoker is spending $5-10 on a pack of cigarettes, so a bottle of juice that costs $20 is going to seem expensive, especially since he was just told he would have to spend $100 on hardware.

How Can We Do It Right

The steps we can take to remedy the situation are simple.

Every last one of us is an ambassador for this industry.   We need to embrace those that are looking to come in from the cold when ever we can, but need to do it in the right way.  The next time you see a smoker, take a step back and think before you rush in like a bull in a China shop.