American vapers should walk into their doctors offices with copies of the Royal College of Physicians report printed out and tucked under their arms.  There are 500 pages of information from one of the most prestigious groups of physicians on the planet, discussing at length their beliefs when it comes to the use of electronic nicotine delivery systems (ENDS) — as should Canadian vapers, French vapers, and every other nationality who wishes to see vaping become an accepted tool for tobacco harm reduction. 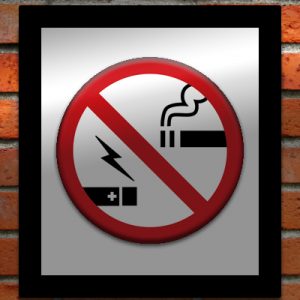 This statement may seem a little strong, but over the course of the last several days, I’ve heard several stories of people going to see their physicians and being given the most horrendous advice.

One young woman, pregnant, was informed by a pre-natal nurse that she should go back to smoking and not vape, as too little is known about the dangers of the latter.  Another story centered around an older gentleman who was told by his doctor to quit vaping before he developed pneumonia and died.

We all know the spiel, most of us were lifelong smokers who turned to these people for help.  Whether they were in Tennessee or Timbuktu, they all read from the exact same script.

You can quit smoking, but it will be hard work.. let me prescribe you with these and set you up with counseling.

Patches, potions, and pills are all accepted by the medical establishment.  These things are all FDA approved and are heralded in prestigious medical journals written in New England and California, but as we know all too well they rarely work.  These same journals are often filled with the anti-vaping studies that we can debunk in 30 seconds — the problem is the doctors rarely see the rebuttal.  Many of them truly believe vaping causes popcorn lung and every time you take a hit on your mod you are inhaling dangerous particulates in alarming levels.  Much like the general public, we can not blame them for coming to this conclusion as it is the only evidence that they were presented.

Now, you or I can walk into the Doctors office and tell them our story.  We can tell them how vaping helped us quit smoking and how much better we feel.  As we do that however, their peers studies are at the forefront of their thoughts, and as they sit there congratulating you, their minds are wandering to the notion that in 5 years time you will be dead because of popcorn.  Even as we present ourselves as evidence and their own examinations show dramatic improvement in our lung function and overall health, the thing that they respect most is their peers opinions, not the anecdotes that we have become.

Many in the medical field are already waking up and coming to the side of the vapers as they see what is happening with their own eyes, while others refuse to accept what is happening in front of them.  Call it denial, call it what ever you will but personally I call it idiocy.  They need to stop with the politically correct dogma of smoking cessation and get with the program as vaping is probably the greatest breakthrough in tobacco harm reduction to date.

The reason I told you to carry around that copy of the Royal College of Physicians report is two-fold.  Number one is simple; if the doctor tells you that vaping is more harmful than smoking you can put a document in front of them that not only corrects them, but also explains why the outdated views that they hold are dangerous.  If these people are shown the stark difference between US dogma and the combined conclusion of 32,000 medical professionals you may just be able to bring them over to our side of the fight.

The second reason is for your own protection.  If you lay out the facts to your family doctor in the words of their professional peers, and they still try to denigrate your personal choice for a less harmful alternative, it may be time to go get a new doctor.

Not everyone can be as cool as Greg Conley of the AVA and slip the US Surgeon General a copy of the Royal College of Physicians report on camera, but maybe taking the time to educate your physician will gain us another supporter in our fight.