The Wismec Theorem RTA (Rebuildable Tank Atomizer), Jaybo’s brain child with inspiration by Matt from Suck My Mod, has arrived.  I have had it in my hands for 5 days and for the next couple of minutes I will be giving you my thoughts on the system.  I will go through its strong points, its issues, and let you know if I believe it is worth spending money on.  I will be keeping this short and sweet, simply because the video at the top of the post has been live for a couple of days, along with the “unboxing” and initial reaction to the Theorem.  This post is actually my final verdict.

Kick back, relax and get down to business, because the reality of the situation is I fell in love with this thing after the first hit.

Let’s Break The Theorem Down 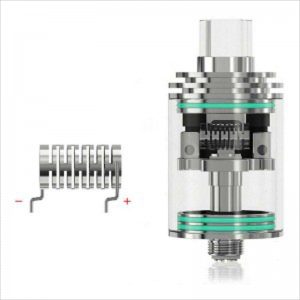 Whether you choose to use the plain glass or stainless steel glass lined sleeve, this little tank looks bad ass.
The tank only holds 2 ml of e-liquid but the top down refilling system is simple and easy to use.
Building on the Theorem is simple, the T style center post allows you to build reasonable coil systems or use the Notch coils that come with the kit.
The cutouts in the deck for the wicks to drop through are a godsend.  Trying to get your tails through the holes of some of the other RTA’s can be a pain in the backside, this takes all the work out of getting your set up right.

The interchangeable airflow control rings are a great feature. If you want flavor for days, taking advantage of the single channel over the  deck block brings it out.  If you prefer more airflow, like me, the dual slot works amazingly.  The whole concept of putting the airflow directly onto the back of the coils may not be new, but the Theorem RTA has nailed it perfectly.

While the thought of having a tank that was basically held together by 3 rubber O-rings initially terrified me, I have to say that it seems to be engineered perfectly.  The positioning of the deck doesn’t allow for any movement of the sleeve even when you are pulling the top off to fill the tank, as long as you are careful you should never end up with a mod full of e-liquid due to tank failure.

Speaking of leaks, Jaybo was seen on video declaring that it is almost impossible to get this tank leaking, even if it’s turned upside down.  For the average vaper, this should be viewed as a fact.  It was literally held upside down for 15 minutes, just to see what happened; IF the Theorem is used correctly it will remain dry.  Over filling the tank and getting e-liquid all over the deck portion may result in juice getting in the airflow control block and all over everything as you purge, but in reality, it’s not the tanks fault if you are a messy vaper (personal experience, I can normally flood anything in 30 seconds).

Filling the Wismec Theorem tank can be problematic unless you are using a unicorn bottle with a long thin tip that can pass through the juice hole built into the deck.  An air bubble can prevent e-liquid from getting down to the well, but I adapted and overcame the problem with a simple fix.  If, unlike myself, you are a patient person the e-liquid will eventually pass through but  I am not patient and figured I could use a needle tip to get it where I wanted it fast.

The notch coils provided with the system are amazing!!!!  If I am able to vape at 30 watts all day long, not get a dry hit and feel as though I am vaping at a much higher wattage, I am a happy camper. Burning and cleaning them between wicks is simple, as long as you are gentle and don’t compromise the gaps in the tube.  If you pay attention to the way the coils are wicked when you first get them, the process of putting new cotton is should be simple, but be aware that I used almost half a sheet of organic Japanese cotton to get enough to fill the void. (We will be putting out a post on the best method for wicking the notch later this week).

The final point I will make about the Theorem is the price — you are getting an authentic, hot off the presses tank for the price of a facsimile.  For the price, even if you hate it, you really aren’t spending anything you will lose sleep over: Just so you know, I am 99.99% sure you won’t hate it.

To get your hands on the Wismec Theorem right now, CLICK HERE!