A simple collaboration between Digiflavor (GeekVape) and Rip Trippers has produced a dripper tank that rivals anything else on the market.  The Pharaoh’s may have been the Kings of Egypt, but does this offering have the potential to rule over the land of Vape?  It’s not the first RDTA to hit the shelves, but they have taken some innovative steps to move this one to the next level, which will be a couple of points we will make as we look at the specifications and dissect the tank.  Grab a drink and lets spend the next couple of minutes deciding if the Pharaoh is going to be nothing more than a Mummy’s Curse or if has the potential to become a God amongst Vapers.

Measuring in at 25mm by 35mm without the drip-tip, the Pharaoh Dripper Tank is available in both bare Stainless Steel or Black.  Externally, the distinct lack of glass gives it the feel of a traditional dripper, much like a Pyramid hiding its secrets deep inside.  At first glance, it is unassuming and if you were unaware of the Pharaoh’s power, the name on the side would mean little to you.

Unscrewing the top cap open allows you to get a good look at the internal components and the true complexity of this design.  The two-post deck is spring loaded, rather than having post holes you have two over sized clamps to make building incredibly simple, whether you are using a simple dual coil build or using a fused clapton, this deck is designed to handle it.  Ease of use seems to be the overall theme of the Pharaoh with combined systems designed to make putting your vape together, effortlessly.

Three giant airflow holes are seated in the base of the deck, perfectly placed beneath your coils for optimum flavor and cloud production.  Joined directly to the click-clock adjustment ring around the base that opens up 3 airflow holes around just one side of the base.

The 510 connection is gold-plated for optimal transfer of power to the deck but, in our opinion, should not be used with hybrid mods as it doesn’t have a lot of clearance.

The e-liquid chamber sits under the deck and is capable of holding up to 2ml.  A simple adjustable plate opens fully to allow for simple wicking and then twists closed to keep the juice where it is supposed to be.  The mechanism works in tandem with the clamp system, allowing you to decide on the size of your wicks unlike some other RDTA’s that are on the market, Digiflavor and Rip have given the user maximum control in their quest for the build of their dreams. 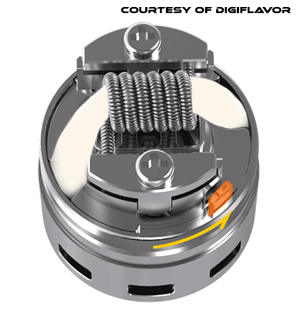 The Chimney section/top cap  is equipped with an internal lip to prevent e-liquid from escaping if the tank is tilted.  The Pharaoh comes with 2 wide bore drip tips, one of which is wide open and the other has a spit back protection grid built-in.  For those who prefer smaller tips, the kit also includes a 510 adapter in the bag of spares.