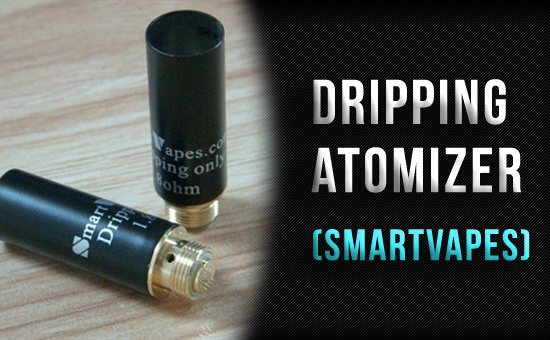 The drip only LR atomizer from SmartVapes has become my favorite at this point and I only have good to say about it thus far.  You may be wondering how this drip only atomizer differs from any other atomizer on the market.  The dripping atomizer has come straight from the factory to SmartVapes, debridged and dewicked.  What does this mean? You get no more bad taste from the first use of an atomizer and no bad taste from the wick burning.

When dripping my first two drips into the atomizer and taking my first pull, I could immediately tell a huge difference in this atomizer.  Not only did I not get that bad taste that you usually get on the first few pulls of a new atomizer, but I could also tell a huge increase on the throat hit.  With the same liquid I’ve been vaping for about a week now, I could tell with this atomizer that the throat hit has increased by quite a bit.  Where I was getting a decent throat hit with other atomizers using this liquid, I’m now getting a hard throat hit on the same liquid.  Along with the increase in throat hit, the flavor increased just a bit as well, which was pretty nice.

I’ve always heard that debridging and dewicking was a good thing to do to atomizers and I’ve always feared that I would mess up while attempting it.  Now with the dripping atomizer from SmartVapes, I don’t have to worry about that anymore.  If you want a good atomizer that can really increase the throat hit and the flavor, then I highly suggest the dripping atomizer from SmartVapes.com