For the last several months, vapers around the United States have asked questions of politicians, from the steps of State Houses to the halls of the nation’s Capital.  With the implementation of the FDA’s regulatory stranglehold set to destroy an entire industry in less than 3 years, the 9 million users of electronic cigarettes and 12,000 companies that look after their needs have tried to get straight answers.  Lawsuits have been filed and legislation has been put into place to try to minimise the damage of the archaic ruling of a Federal Agency that is out of step with scientific evidence.

While our Cousins in the United Kingdom are embracing this technology as a way to aid smokers quit combustible tobacco, with everyone from The Royal College of Physicians to the Prime Minister, David Cameron, endorsing vaping as a public health gift that’s 95% less harmful, we’ve been left with an awkward silence from those who are attempting to become the next “Leader of the Free World”.

As both Candidates from the major parties have done little more than poke holes into each others personal lives on national television, a 3rd party option has been steadily distinguishing itself as a viable option for the office of President.  We have 2 candidates who feel it’s appropriate to ignore a 9 million strong voting block, a group who have largely become single issue voters when it comes to the Federal Government trampling on their rights, first as smokers and now as vapers.

From The Campaign Office Of Gary Johnson and Bill Weld

After a persistent effort from our good friend and owner of Cloud Chasers Inc, Kurt Loeblich, the following statement was released late yesterday evening — 10/03/16 — by Jim Wallace, the National Director of the Johnson/Weld Campaign. 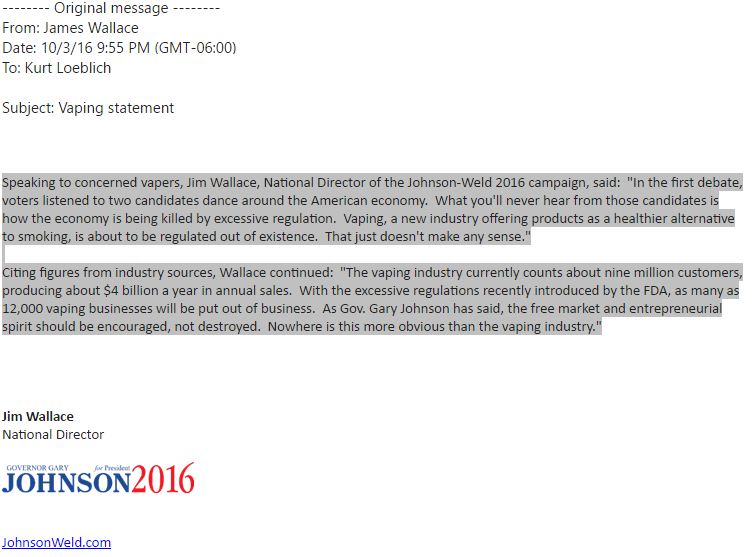 Addressing the vaping community on the issues they currently face is a massive step, one which neither of the establishment candidates appear willing to take.  Acknowledging the fact that the vaping industry is facing annihilation due to regulatory burden may not seem like a big deal, but to the thousands of business owners and their employees this is a step that should bring what is currently happening to them into the national spotlight.  Gary Johnson and Bill Weld, both former Governors who both understand that America runs on small business make up the ticket that is best, not just for vaping but for the plethora of industries that are being crippled by an out of control Federal Government.

The release of this statement, by itself, should be viewed a line in the sand.  Mr. Trump and Mrs. Clinton are both happy to stand on a stage that Gary Johnson has been denied access to and bloviate about who is going make America great over the next 4 years, without actually addressing any of the issues that we, as a nation, face on a daily basis.  Vaping is not only a $4 billion dollar a year industry, for many people it is a lifeline that made them put down cigarettes and most of the people who now work in the industry are former smokers that this technology helped, yet until now we haven’t had a candidate brave enough to face the issue.

Where Do We Go From Here?

This message needs to be spread to every corner of the country.  Every vaper needs to see that they have a ticket aiming for the Oval Office  who actually understands what is going on, business owners need to take notice of who is prepared to take on the issues that directly affect them.  Voters need to take this statement to the campaign offices of the other candidates and demand their answers, simply put, this statement from Mr. Wallace and the campaign office should be used as a battering ram until they address an issue that affects 1 in 6 American adults.

If it takes a Libertarian, third party option to save the vaping industry, maybe it’s time to put the broken system on a 4 year break.