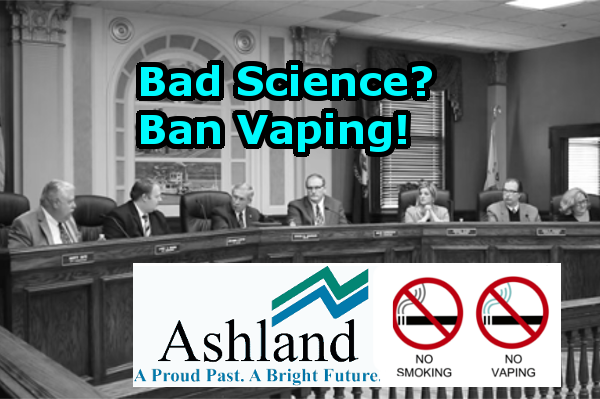 Vaping in public is now illegal in the city of Ashland, Kentucky.  Maybe that is a slight stretch of the truth, but the city council on Thursday voted to implement an amendment to existing anti-smoking ordinances, if you couldn’t smoke there before, you can’t vape there now. 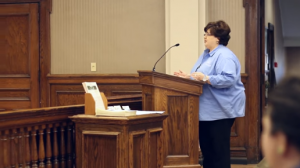 While the residents and vaping community believed that a decision would not be reached until the middle of next month, it appeared that the opposition to vapers rights was well prepared for the meeting.  Information packets in hand for the councilors, Amy Jeffers, director of Pathways Regional prevention center stood before the assembly and made her case.

Her argument was solidly founded in the case that second-hand vapor is dangerous.  Citing a California-based research paper that made the claim that vapor was, in fact, an aerosol made up of dangerous particulates that could harm bystanders.  Her claim was that:

“We know that second hand aerosol for workers and patrons is a risk to their health”.

Stating that while she could not provide the volumes of data connected to second-hand smoke, she had preliminary findings that second-hand aerosol exposure was harmful.

To the uninformed council members, her claim could be seen as a reason to be genuinely concerned about the effects of on people who are not using the devices.

In defense of Vapers rights, we saw Carl S Wellman II, a local vape shop owner in a neighboring town and representative of the Kentucky Smoke Association read a prepared statement calling for the city to refrain from linking the use of electronic nicotine delivery systems to traditional tobacco:

The Kentucky Smoke-Free Association (“KSFA”) has learned the City of Ashland is considering an amendment to its city-wide public smoking ban to include the public use of electronic cigarettes and personal vaping devices. This amendment would classify electronic cigarettes and personal vaping devices as if they were traditional combustible tobacco products like cigarettes and cigars. KSFA believes this proposed amendment is short-sighted, not rooted in fact and fraught with potential legal issues.

The current Ashland smoking ordinance states its purpose is to: (1) protect the public health and welfare by prohibiting smoking in public places and places of employment; (2) guarantee the right of nonsmokers to breathe smoke-free air; and(3) recognize that the public’s need to breathe smoke-free air shall have priority over the individual’s desire to smoke. KSFA believes these purposes are laudable. These purposes, however, have nothing to do with electronic cigarettes or personal vaping devices.

KSFA urges the Ashland City Council to thoroughly research the technology and science behind electronic cigarettes and personal vaping devices before considering the classification of these products on par with tobacco and banning their public use.

Jerry Goodwin, a 20-year smoker, owner of District 4 Vapor, another local store, and staunch vaping advocate stood before the council:

Upon reading the proposed amendment, the existing ordinance contains many reference studies on the health effects of combustible tobacco products used in public spaces.

There are no studies cited to claim any adverse health effects from tobacco free products such as personal vaporizers.

My concern is the ordinance will unduly classify non-tobacco, smoke-free products to the same scrutiny as a traditional combustible cigarette.

This is a bold proposition, as to my knowledge, the Kentucky state & federal legislation have yet to rule such a measure.  I feel the use of these devices should remain at the discretion of each property owner.

Many customers tell us their employers now embrace vaping in the workplace, as it improves productivity from less smoke breaks.

A blanket ban on vaping will force them outside among smokers they’ve so happily liberated themselves from.

I won’t claim that vaping is 100% safe, but it is wrong to lump it in with an existing cigarette ordinance on appearances alone. Any regulation imposed on vaping in public should stand on its own merit citing data that proves it’s a significant threat to public safety.

Published studies are available, and many show that electronic vaporizers and the ingredients delivered, are many times, safer than smoking.

The commission requested no proof in favor of vaping, citing that the Huntington, West Virginia ordinance was a “Model for the country”, yet they agreed that existing vape shops should be allowed to operate as usual.

The problems that surround this case are numerous.  We will start with the fact that the council had originally planned to vote on this issue on 11 February, but decided to move the date to January 28 without issuing any notice.  It is the prerogative of the council to do business when it see’s fit, but if they are voting on a piece of legislation that affects a large number of their constituents it would have been nice to allow those people to have their voices heard.

From the information we have been given, the members on the bench had already made up their minds and this hearing was a formality to follow in the footsteps of a neighboring city.  Rather than basing laws on facts, they were only interested in getting this out of the way.

While the majority of the general public are blissfully unaware of what is going on around them, people like Carl, Jerry, and thousands of others are tirelessly trying to bring the truth to light.

I mentioned at the top of this article how the ban in Ashland was based on bad science.  The report that Amy Jeffers cited in the council chambers has been refuted and disproven up one side of the room and down the other.  Her claims of dangerous particulates from aerosol’s have been debunked many times over, and had she actually read the study from the University of San Francisco, rather than just reading the press release notes from Stanton Glantz, she would know that the evidence to back up her statement shows that there is absolutely no evidence. If she would have taken the time to research her position  properly, she would have found this article on CliveBates.com that explained in detail exactly how wrong the initial reporting was, or if that doesn’t explain it clearly enough maybe this article from Dr. Konstaninos Farsalinos.

We have a city mayor who is basing laws that will potentially kill some of his citizens based on hearsay and inaccurate scientific data, just because someone told him that vaping was bad.  The decision that the council members made is giving the impression to the public that vaping and smoking are the same thing.  While we will not say that vaping is 100% safe, when you are talking to smokers they are in essence 1000’s of time less dangerous than cigarettes, but Pathways and this council just told people not to bother quitting becasue the alternative is just as dangerous.

In my article last week, I mentioned that the mayor mentioned he believed vaping was dangerous because e-liquid contains anti-freeze chemicals.  It seems to me that the mayor should have actually looked into this problem, rather than guessing what to do based on a city across the river.