This week incredulity has crept into my head as I’ve watched vapers on social media complain that manufacturers are releasing device after device and a hundred new e-liquid lines.  This post is probably going to aggravate a few people, but only because they haven’t bothered to read something other than a headline.  In this one I’m not going to show my usual restraint — we’re all adults here so I am going to lay the facts on the line and let the chips fall where they may.

This is one of those things that should be read by vapers, smokers, and those who have no skin in the game, just so they can see the reality of what is about to happen. 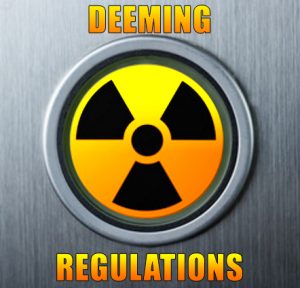 If that phrase goes over your head, let me explain.  You detonate a nuclear device and everything is pretty much screwed for the foreseeable future, nothing will grow and anything that was alive in the area at the time will wither and die rapidly (look up Chernobyl in the Ukraine and Fukushima in Japan for reference points).  In March of this year, the FDA revealed its vaping regulations, which were interpreted as a stinking pile of horse-crap and essentially 2 nuclear devices on a countdown, ready to obliterate the vaping industry in the United States.  The agency said it was intended to “protect the children,” but in reality the FDA deeming regulation of Vapor Products is intended to be a weapon of mass destruction.

August 8th, 2016 is the day that they’ll set off the baby nuke and the reason why manufacturers seem to be releasing a new mod every couple of days.  If it isn’t on the market by August 8th 2016, it never will be.  The truth of the matter is these products may only stay on the shelves for a maximum of 2 more years; unless by some miracle someone gets around the FDA, but when it comes to box mods and open systems they’re already telling people to save their money and not even bother filling.

Instead of complaining about the new products, in between hand checks, you should be thanking these people for working their asses off to make sure that you can still go out and get something new to play with.  Sitting on social media and acting like this is some amazing new insight that nobody knew about would be laughable if it wasn’t so pathetic.  We are within 2 weeks of vaping as we know it ending and people still act like it’s a damned game.  Just 2 years after the baby nuke sets off,  armageddon has already been marked on the calendar.

Do I begrudge these manufacturers for bringing out a bunch of new products that are all suddenly starting to look and act the same, many of them taking concepts directly from each other?  Absolutely not, because in a few weeks time they’re going to have to pay hundreds of thousands of dollars just to see if they can apply for a firmware update to put on your mod.

Pretending we can find loopholes and live above the law may be an idea that’s appealing to some people, but the truth of the matter is, that fuck-you-Jack-I’m-alright attitude is exactly what got us into this situation in the first place.  Instead of bragging about how much e-liquid you have stashed in your basement, get off your ass and get involved in the fight.

If you hate radioactive snow, more importantly the idea that vaping is smoking and will be regulated with tougher rules than cigarettes with absolutely no concern that it could prevent a bunch of people dying, get involved in the fight.