A recent study published in “Addiction” shows that vaping, or the use of electronic cigarettes (Electronic Nicotine Delivery Systems) has resulted in 6.1 million people quitting smoking while aiding a further 9 million citizens in their quest for harm reduction in the 28 country European block.

Scientists from across Greece and France, namely the University of Patras (Greece), Onassis Cardiac Surgery Center (Greece) and the French National Research Institute for Health.  Medical Researchers delved into the data from the 2014 Eurobarometer on Smoking and the use of Electronic Cigarettes, and then analyzed the results.  In most cases, these findings fly in the face of FDA, CDC, and European parliaments claims about the efficacy of vaping for smokers and the technology’s draw on those who have never smoked.

These are probably the highest rates of smoking cessation and reduction ever observed in such a large population study.  The European Union data show that the use of electronic cigarettes seems to have a positive impact on public health for two main reasons: (1) High smoking cessation and reduction rates are observed, and (2) Electronic cigarette use is largely confined to smokers (current and former), with minimal use by non-smokers. 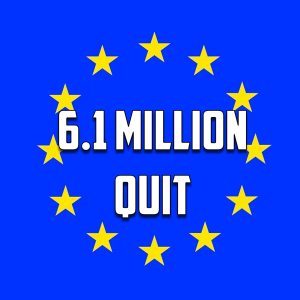 According to the survey, 48.5 million European citizens had tried electronic cigarettes, but only 7.5 million claimed current use.  Among those current users 35.1% claimed cessation of cigarette use and an additional 32.2% show marked reduction in tobacco consumption.

While there have been a great deal of controversy about the re-normalization of smoking and the “gateway effect” that many American researchers have screamed about for several years, this study intimates that is not the case.  Jacques Le Houezec, a neuroscientist and researcher at the French National Research Institute for Health and Medical Research, states: 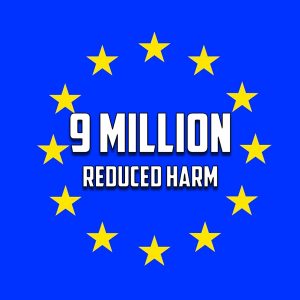 While this does show that a few non-smokers may be drawn to this technology, adoption and extended use (especially nicotine containing) are minimal.  This is not the first time we have seen the “gateway theory” shot to pieces, but the myth will prevail.

The Eurobarometer survey itself is not something that can easily be dismissed by the opponents of vaping, as this study is performed by the European Commission across all 28 member states, and Smoking and the use of Electronic cigarettes is just a small part.  Unlike other research that has been dismissed by various organizations (generally because someone perpetuates a story about the funding or honesty of the investigators), this goes into detailed examination of the frequency of use, differentiates experimentation from regular use and examines the use of nicotine-containing electronic cigarettes.

Professor Konstantinos Poulas emphasizes the importance of this survey in assessing vaping in the European Union:

The questionnaire of the Eurobarometer is probably one of the most detailed ever used in analyzing electronic cigarette use on a population level- Moreover, the survey enrolled a large sample of Europeans which was representative of the total EU population. A similar design should be used in all population studies.

While we can guarantee that this study will be dismissed by the Food and Drug Administration here in the United States, much as both the Public Health England declaration and the findings of the Royal College of Physicians, it is good to know that elsewhere in the world, honest scientists are attempting to paint vaping, or the use of electronic cigarettes, in a more favorable light.

If an industry already has a massive target audience, namely the many millions of smokers currently addicted to tobacco, why (as many in the American Public Health and Political machine would have you believe) would they be attempting to hook a new generation on Big Tobacco’s products?