If you want the truth about vapor damage to human airways, you are in the right place.  We will discuss the cytotoxicity (the vapors ability to be toxic to the lung tissue), scientific methods for results in living human cells and the ramifications of vaping in general.

For the TL/DR crowd, the answer is that after 6 hours of constant bombardment with e-liquid, it does no more damage than ambient air.

The study we will be discussing named Development of an in vitro cytotoxicity model for aerosol exposure using 3D reconstructed human airway tissue; application for assessment of e-cigarette aerosol was performed by British American Tobacco and MatTek corporation and can be read in full here.

The idea was to develop a standardized solution for future testing of electronic cigarettes on human lung cells that were as close to the living thing as possible.  Most current studies have used cells in a petri dish and just bombarded them with e-liquid from coils that got burnt after the first 5 minutes of use, making the rest of the test data corrupted.  BAT and MatTek developed a system using a commercially available 3D model of respiratory epithelial tissue, the EpiAirway and the popular VITROCELL smoking robot, an aerosol exposure system.

E-cigarette vapor can contain nicotine, flavorings and thermal degradation products, so it important that the equipment can tell the difference between what is harmful to the lungs and what is not.

They set up their system to first look at the reaction to known irritants to the lungs in liquid form so that they had their base model before going on to look at the difference between cells that were exposed to cigarette smoke and e-cigarette vapor.  They tested 2 popular and readily available e-cigarettes to assess their irritant potential for up to 6 hours. 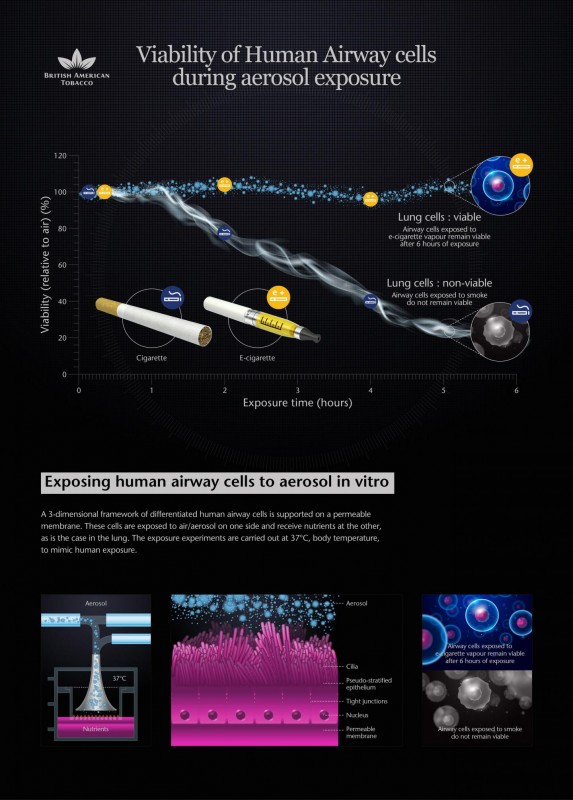 Unsurprisingly, after 6 hours of testing, the lung cells in the experiment with cigarette smoke had been reduced to around 12% viability, basically meaning they were dead.

After the same amount of time, the EpiAirway that had been exposed to electronic cigarette vapor was similar to the control experiment only exposed to the ambient air in the room.

This means that the cells remained viable after vapor was  inhaled for 2 seconds, every thirty seconds for 6 hours. Still not really a real world application as I don’t know anyone who would hit their mod 1500 times in a day, so this should be seen as a few days in normal conditions.

Obviously, this study can only be quoted when talking about the 2 brands of electronic cigarettes that were studied, but the ramifications of these results are huge.  We have a study that was conducted using readily available technology to simulate the effects of vaping on the human lungs, proving that these tests can be performed without corrupting your data to fit your theory.

When it comes to Government regulation, something which is inevitable, these are tools that can be used to the advantage of the vaping industry as a whole.  This is something which can be set up to look at any formulation of e-liquid on the market while simultaneously putting to bed the many myths that have been created surround the electronic cigarette/vaping industry.  If we can adopt the practice to compare hundreds of thousands of pieces of data that all say the same thing, it is going to become much more difficult for single studies screaming about the dangers of vaping to gain any traction.

The next study I would like to see is one that uses these parameters to simulate 5 or 10 years worth of vaping, even though we have people walking around who are actual physical proof.

The majority of those in global governance continually assert that even though there are millions of vaper’s telling their stories, we are nothing more than anecdotal comments.  If they want scientific data so badly, let’s give it to them.

The only downside is that even if these studies are released, such as the Public Health England study that has resulted in electronic cigarettes and vaping devices being hailed as 95% safer than combustible tobacco and viable smoking replacement products, many people will choose to ignore the facts because they do not fit into their narrative.

As always,  enjoy your vaporizer and vape safe!