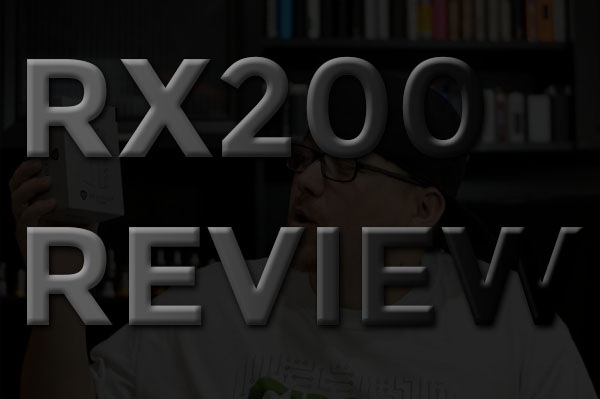 In this Wismec Reuleaux RX200 review, I’ll share an in-depth view related to the appearance, features and performance the device has to offer.  Wismec came out of the gate with regulated mods such as the Presa, mechanical mods such as the Skyladon, and even tanks such as the Amor.  Though these products didn’t receive much attention from vaping consumers, the Wismec brand quickly blew up when the Reuleaux DNA200 was released.  Since the DNA200 version carried quite the hefty price tag, the best way to get this impressively designed product into every hand within the market, they did away with the DNA chip and popped in their own, significantly dropping the price and offering power and technology that’s only seen with high-end, more expensive mods.

The Reuleaux RX200 as a whole looks phenomenal!  It takes on a different shape than anything else you’ve seen, moving past the common box mod.  The front face of the device is flat, while the two sides flare out, then curving back around towards the back to give the device a nice comfortable feel, and to accomodate its 3 cell design. 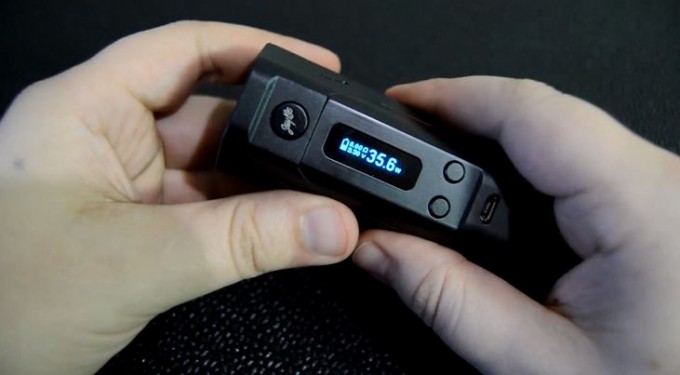 The top of the RX200 sports a 510 threaded connection with a spring-loaded center pin.  While viewing the top, you also may notice the Wismec logo that rests on the top in the area that isn’t being used.  The front facing of the RX200 is recessed to ensure that none of the buttons are pressed in accidental if it somehow accidentally falls on its facing, but it also gives the device a better appearance adding a touch of eye candy.  On that facing, there is a fire button at the top, which is engraved with “Jay Bo” – the cooperative designer of the mod.  Just below there is an OLED display screen, then two small adjustment buttons, while the bottom of the device and not in the recessed area is a micro-USB port. 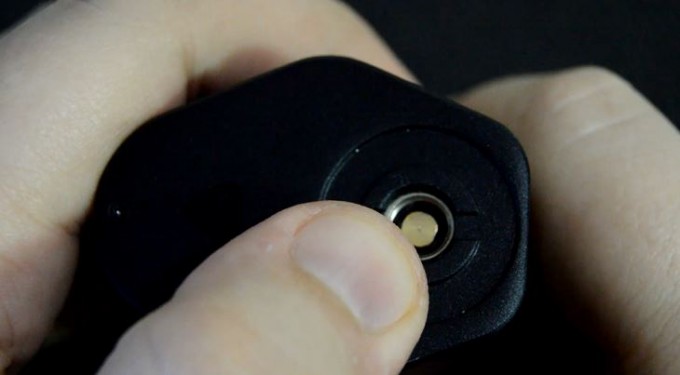 Both sides of the Reuleaux RX200 has 3 ventilation holes, as well as a small indention to help you remove the unique magnetic battery cover.  When you take the battery cover off, you see a quality made enclosure for the 3 cells, as well as gold-plated contacts. 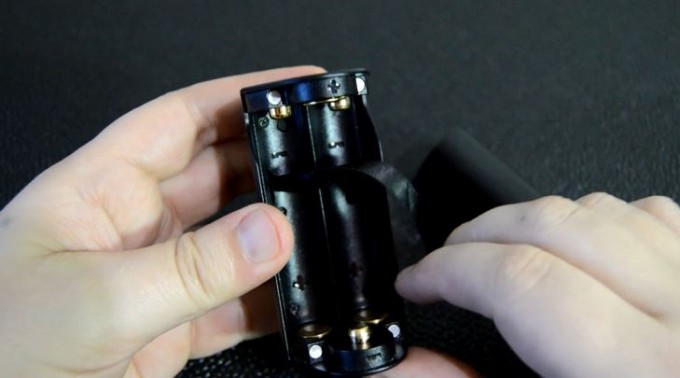 There’s a lot to be said about this device, even though it’s rather simple.  It may look super advanced, and granted it is an advanced device, but it has user-friendly functionality.  The first feature I’ll point out is the shape of the device.  Even though it may look like it will be uncomfortable, which was my first thought, it’s actually very comfortable to hold and feels really good in the hand.  In fact, out of all the mods I’ve owned, this is by far the most comfortable mod.  It has perfect curves, the perfect shape, and even has that weighted feel to it that will let you know “Hey, I’m here and I’m solid, so attach anything to me!”.

Not only was this device shaped in such a way to feel comfortable, but it was also shaped this way because of the battery configuration.  When you remove the back cover, it allows you to insert 3 batteries, 2 in the back and 1 in the front.  It’s a genius design that makes you wonder why it took manufactures so long to think of it.  Inserting the batteries into this device is easy, however, taking them out can be a huge pain in the ass.  And I do mean a huge pain!  Furthermore, I must say, having a device with three batteries is amazing, as you’ll receive days of battery life, especially if you’re set typically between 35 and 40 watts.

Moving on, I can use this device at such a low-wattage if I want – it gives me better battery life and it’s perfect for my usual SubTank Mini.  However, if I wanted to take it up more than a notch, I have the power right there at my fingertips, since the Reuleaux RX200 packs a monstrous 200 watts of vaping power.  And, if you’re looking to use its hefty power, you’ll obviously be dropping low in resistance, so it has the ability to support resistances as low as 0.1Ω while using its wattage mode.

If that isn’t already enough to excite you over this device, you’ll be pleased to know that the RX200 also comes with temperature control, which is the industry’s latest hype.  This technology is being used more and more on devices that are being developed today.  Using the temperature control feature will allow you to use Titanium, Nickel 200 and Stainless Steel wire in the range of 200F to 600F, and supporting resistances as low as 0.05Ω. 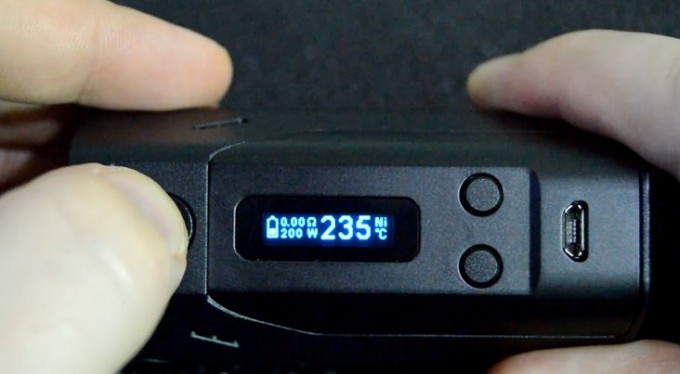 The next thing we need to talk about is the display screen on the RX200.  Now, as many of you may already know, Wismec is merely a sister company of Eleaf, which is also a sister company of Joyetech.  However, the same screen they are using for the iStick’s is the same screen they’re using for the Wismec Reuleaux RX200.  With that said, the screen won’t be the best looking in the world, but it’s understandable due to the super affordable price.  However, there is something cool you can do with the screen – you can actually remove the face plate from the RX200 and do a simple modification that will allow you to change the screen color to just about any color you can think of.

The last feature we need to talk about is the RX200’s ability to be upgraded to a new firmware version in the future.  That’s right, even though the price is super low, Wismec made the device where you don’t have to trade it in for something new when new technology arises.  With the RX200, you can update your device to new versions as they come out with them.  In fact, the latest firmware release was version 3.00, which added a few new features.  For those of you that already have the RX200 and looking to update your firmware version to the latest, Windows users go here and Mac users go here.

When it comes to the performance, the RX200 is rockin!  Not only do you get outstanding battery life, but you get a nice hit from the new RX200 chipset.  Though it doesn’t have the spunk and same consistency that you’ll receive with the DNA200 version, you’re still getting a stellar device for super cheap.  None the less, the RX200 can run up to 200 watts, so if my little 37 watts it typically stays on isn’t enough, I can ramp the beast up to more power than I can even handle.  Again, it performs great, but it doesn’t perform like the DNA200 by no means.  Other than that, the temperature control works perfectly, as it should, and the buttons, screen and the rest of its features comes with no complaints from me. 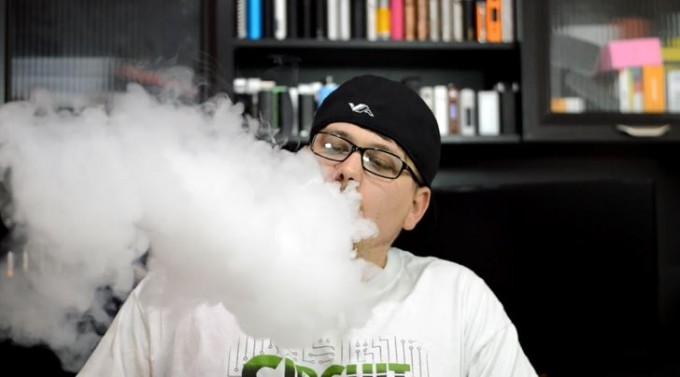