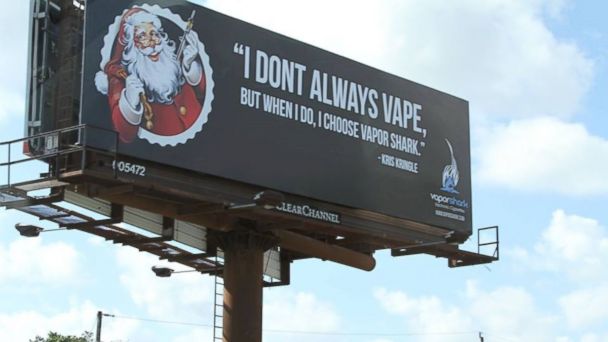 To follow along with the Christmas spirit, Vapor Shark – an electronic cigarette company, has been receiving some backlash for putting up a billboard in Florida with a vaping Santa.

The Campaign for Tobacco-Free Kids complained the ad was similar to old cigarette ads aimed at children and called it ” a new low.”

Aaron Frazier of Utah Vapers even felt the billboard ad was inappropriate, saying “Showing Santa vaping, globally recognized as a children’s icon, is irresponsible and is and will be seen as a ploy to appeal to under age customers.”

Though I personally feel this ad isn’t directed towards children, it is an advertisement that any knowledgeable person within this industry would know not to create. It’s not that Santa is vaping, it’s that the ad gives every person who opposes e-cigarettes another excuse to say “look, vaping is being advertised to kids.”

We disagree … it’s a difference of opinion. The only type of kid that would be persuaded by Santa Claus is a 5-year-old. I think a gorgeous woman would be more persuasive for a teenager. – Vapor Shark CEO Brandon Liedel