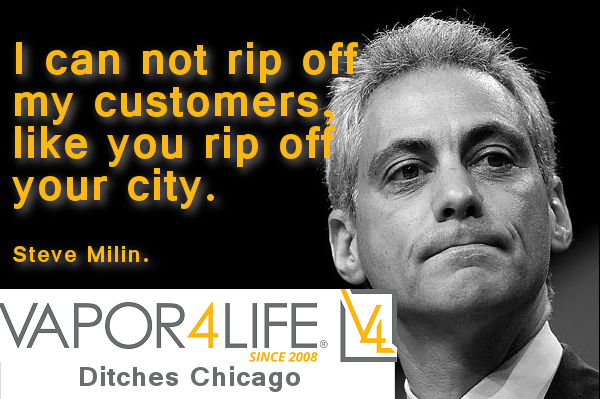 Vapor4Life announced this week that they will be closing their Lincoln Square vape shop in Chicago.

Considering the insanity that has been thrown in the face of the vaping industry from that city and its surrounding county, this hardly comes as a shock, but this is a sign that the vape industry will not lie down and die quietly.

While they make it abundantly clear that services to their customers will remain intact both online and in Northbrook the company’s founder Steve “SMILIN’ Milin took a few minutes to ensure that nobody was under any illusion as to why they were pulling out of the city.

The Greatest Flounce Out In Vaping So Far

By now, I am sure we are all used to the Flounce, normally a person leaving a group on Facebook in a way that is sure to get the attention of those who happen to be scrolling by.  If this had been put forward in such a setting I would have given it a 20/10, simply because the amount of truth that is in Steve’s swan song is amazing.

I won’t detract from the original piece, I will link to it at Vapor4Life’s website right here so you can head over and soak up the glory.  You have to believe me when I say this, this piece literally has to be seen, applauded and put in a scrapbook for posterity.

The sad thing is, I shouldn’t be standing up and applauding this man for the things that he say’s, which for the citizens of Chicago are terrible, but, I have to because this is the only outcome a sane person could have expected from Rahm Emanuel’s doubling down on crazy.

What Is Happening In Chicago

For those who aren’t aware, the Mayor Of Chicago and his cronies have adopted the attitude that vaping is the root of all evil and must be eradicated at all costs.  They have embarked on an expensive and relentless campaign telling children as young as 5 years old that vaping is poisonous while simultaneously raising taxes on everything vape related to the highest in the country.

But here is the kicker,  according to Steve, the revenue being collected will not go towards helping smokers gain a healthier lifestyle but will be going towards a 2-week summer camp for kids.

The ad campaign is based entirely on outdated debunked research and has little hold on reality, but as we all know, the general public swallows junk science like it’s an ice-cold soda pop.

The untruthful ad campaign is there to allow them to tax vapor products like tobacco, but I guess the Government once again have proven that they just don’t get it. Vapers won’t lay down and take it and the owners of businesses will just pull up and move out

Smilin goes as far as to ask the mayor of Chicago exactly where the apparently penniless city got the funding for its lavish anti-vaping tirade.  The following sentence mentions that while vaping and loose leaf tobacco both got taxed through the nose, Big Tobacco was given a free pass.

Vapers won’t lay down and take it.  The owners of businesses will just pick up and move out,  we live in an age where it is more cost-effective to do business online and we have enough options open for business owners not to be held ransom by the racketeering practices of politicians.

We wish Vapor4Life the very best in the future and hope they can continue to do what they do without having Uncle Rahm hanging over their heads.