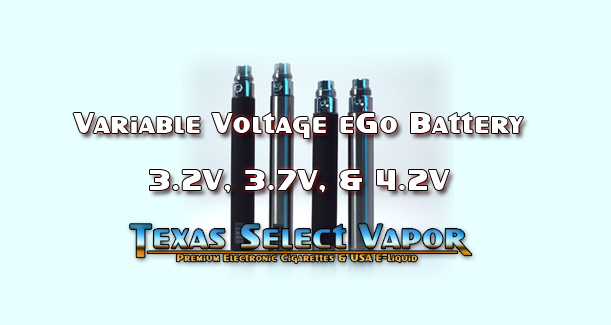 When you think of an electronic cigarette mod, you usually think of a big body to house multiple batteries or one big battery, which is usually the case. I’m not implying that a mod has to be in a big body, but that is usually the case. As most of you know, a mod is a device that has been modified from its original state of being an electronic cigarette. With that being said, a small ego type battery that has been modified to be variable voltage would be considered a mod of some type.

A few weeks back I received a variable voltage ego battery and ego cone cover from TexasSelectVapor.com. The idea of variable voltage already had me excited, but it being as small as the normal 650mAh ego size, it made that much more. I own other big battery mods, such as the 18650 ego (knock-off version) and the Bombshell. I like my big battery mods because it’s a very solid vape at 3.7 volts. I personally don’t feel the need for higher voltage mods. I feel that if you have a nice charged big battery with a Joye 1.5 LR atomizer, you’re destined for an awesome vaping experience.

The reason this small “mod” has become one of mine and my Wife’s favorite PV’s is because at 4.2 volts matched with a Joye 1.5 LR atomizer, I get the same vape as I do with a big battery 3.7 mod. The time between charges on the VV EGO can’t compare to a big battery mod, but in that time period, you get a good solid 3.7 volt vape. When I only use the VV EGO, I get about half a day without having to recharge which doesn’t bother me much because the charge time doesn’t seem long at all.

Another great addition to this device is that it has a LCD power indicator at the bottom, showing you the remaining power until you need to recharge the battery. I like the battery indicator because I know once it shows two bars left, I won’t be getting a good vape and it is time for a recharge. On a regular ego battery, you don’t have that option and instead, the button blinks to basically let you know that your battery is pretty much dead. With the VV EGO, no more will I have that problem.

For the price of $ that the Variable Voltage EGO is listed for at TexasSelectVapor.com, you can’t go wrong. The device is made of good quality, looks very sleek, has some great features and produces a great vape. As of right now, the VV EGO is at the top of my list for my most used PV’s and my Wife’s (Ashley) as well. You can see her response to the VV EGO below in the comments section.

If you’re looking for a great electronic cigarette that is small in size, but puts out a great punch with awesome features, I encourage that your next PV purchase is the Variable Voltage EGO from TexasSelectVapor.