In this What To Expect When You Switch Form Smoking article, we will be focusing entirely on the transition from cigarettes to vapor products.

We have to bear in mind that no two people are identical, although the majority of people will agree with what I am about to say.  Regardless of the thing’s you may have heard, we are going to lay everything on the line so you don’t get any sudden shocks or surprises.  Kick back, grab a drink and let’s unravel a couple of mysteries.

Vaping Is Not Voodoo

Contrary to popular belief, you will not go out today, buy a mod and immediately forget that you were ever a smoker.  As with anything else in life, if you want to use vaping to help you quit smoking, you have to actually want to quit smoking.

If you don’t have the willpower to leave the cigarettes in the pack, or better yet the trash can, vaping probably won’t magically help you end years of addiction.  It can help take away the cravings for nicotine because you are still getting that, but it won’t erase the need to light up.  Get a good support system, friends, family, even groups on social media and tell yourself you are done.  If you have others backing you up it is much harder to back out.

Make Sure You Find A Setup That works For You

There are vape shops everywhere, they are becoming almost as much a part of everyday life as a Starbucks on every corner.  Do not fall into the trap of believing that the things they sell in the smoke shop are vaping products, we call those “cig a likes” and for the majority of people, they do not work.  You don’t have to spend hundreds of dollars to start vaping, but getting a decent setup will benefit you in the long run.

Don’t fall into the trap of trying to buy a cloud chucking kit when you start out.  The amount of vapor that those things produce will make you feel like you are drowning and that will be the end of your vaping experience.  When you were a child learning to swim, did you start out by getting dropped out in the middle of the ocean?  Same principal, take baby steps before trying to run a marathon.

Your Body Is Going To Hate You

The first week or two after you start exclusively vaping will be the hardest.  Your body will be screaming at you, demanding that you light up a cigarette and quit using this junk that is pretending to be smoke.  Don’t worry, this is absolutely normal.

It isn’t the vapor that is doing anything to your body, it is the fact that your body has become reliant on a long list of chemicals and additives that you never knew were in those cigarettes.  Tobacco companies have had a long time to tweak the recipes in their products to make them as addictive as certain street corner pharmaceuticals and this is your body’s way of telling you that it needs them.

Think about all the times you nearly ripped someone’s head off because you needed to smoke.  Fun fact, that wasn’t the nicotine talking.  Vaping is basically Nicotine Replacement Therapy, although you are not replacing the nicotine just removing all the junk that came with it

Your Lungs Will Be Plotting A Coup 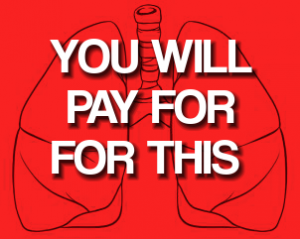 Imagine you have been sticking your hand in boiling oil every day, repeatedly, for 20 years.  One day you decide that you don’t want to do this anymore and start treating the burns and the scars.

Welcome to the inside of your lungs folks.  Your airways have become gunked up with years of abuse, you have Bronchioles that are barely open and Alveoli that has been swimming in tar for years.  The second you quit smoking, your body forgives you and begins ardently trying to fix itself.  Now, just because you are forgiven does not mean that everything is rosy, as the toxins are pushed out of your lungs, your body WILL make you pay.  The coughing,

The coughing, wheezing, and hacking will subside after a short time but there will be a few occasions when you try to remember exactly why you wanted to quit in the first place.  The vapor products don’t contain anything that will make this problem get any worse and if you fight through it, you will be well on your way to living a longer, healthier life.

Just remember, it will only work as well as your mind says it will – wake up every morning and tell yourself that you no longer smoke and eventually your body will agree with you!