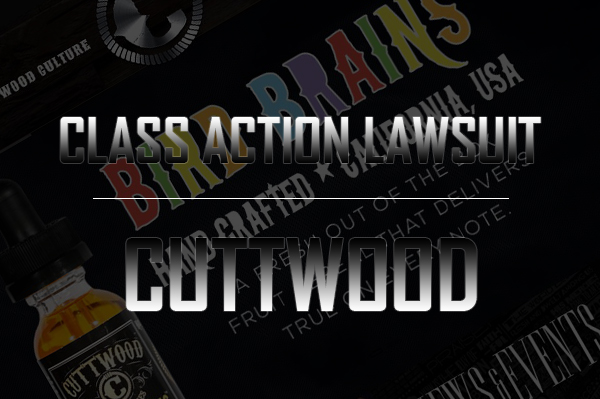 With the latest media surge discussing Diacetyl and Acetyl Propionyl, it seems as if there are some vapers jumping on the bandwagon with lawsuits against e-liquid manufacturers that aren’t openly sharing that their e-liquid product contains these ingredients.  The most recent to get hit is Cuttwood, one of the largest e-liquid brands currently on the market.  Cuttwood, LLC now faces a class action lawsuit, being accused of selling e-liquid that contains those harmful ingredients.

The new lawsuit Cuttwood now faces was filed on November 23rd in the federal court in California (Case No. 8:15-cv-01961) by Jennifer Cox.  The woman says that she would have never purchased Cuttwood e-liquid if she would have known that they contained these harmful ingredients.

There are many e-liquid manufacturers that have already changed their e-liquid formulas in light of this harmful ingredients, while there are others that continue to ignore it and eventually get hit with a lawsuit.  Those that take the public’s safety as a priority are ensuring that their e-liquid product doesn’t contains these ingredients by having the e-liquid professionally tested.  There was a company not long ago that had each e-liquid brand it carried tested and the results were shocking (results can be seen here).  Cuttwood e-liquid allegedly contains diacetyl and/or acetyl propionyl, in what is believed to be the highest concentration that has ever been seen in any e-liquid, according to the complaint.

“Cuttwood’s warning label is misleading and deceptive because while it identifies nicotine as a chemical component, it does not provide a fill list of other carcinogenic ingredients and other disease-causing substances.”

As for Cuttwood, they’re now facing an immense battle that they’ll likely not win.  However, with the popularity they’ve already received, even after getting with the times and removing these harmful ingredients, they could bounce back with little effort.