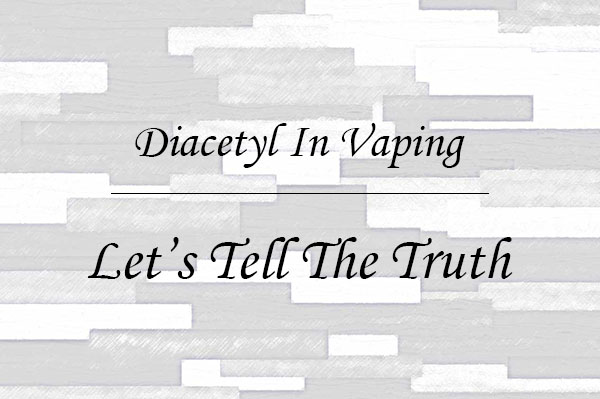 For the last 24 hours, my  social media news-feed has been bombarded with share after share of a recently published study from Harvard University.  I have received countless emails from people who have been inundated from non smoking friends telling them to go back to cigarettes because vaping is so dangerous.  If you have been in the vaping world for a while, you should already know about Diacetyl and Acetyl Propionyl, both of which have been a topic of heated discussion as they have been repeatedly linked to a condition known as “Popcorn Lung”. Grab a drink and get comfortable, because our post today “Diacetyl In Vaping – Lets Tell The Truth” is about to look at the details you should know and tell you everything they left out of the study.

We all know that if something sounds like a chemical name, everyone screams and loses their heads.  Mention the chemical name for water to most people, Dihydrogen Monoxide, and say that it is linked to the manufacture of chemical weapons.  9 times out of 10 they will call for the banning of H2O out of fear.  A few years ago, Diacetyl was linked to a COPD illness that gained the name of popcorn lung due to the circumstances under which it was first encountered.  It came to the attention of the general public when 8 workers at the Gilster-Mary Lee popcorn plant in Jasper Missouri developed bronchiolitis obliterans.  It was deemed that the irreversible illness was caused by inhaling airborne artificial butter flavoring (Diacetyl) within the factory.  The National Institute for Occupational Safety and Health (NOISH) recommended that from that day forward anyone working in the microwave popcorn manufacturing field should wear respiratory protection.  The name was derived from the setting the disease came from, not some scary deformation of the lungs that looked like popcorn.

You have been Inhaling Diacetyl For Years 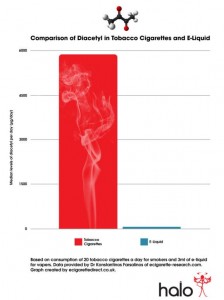 Vaping was designed for smokers who were looking to take a less hazardous path than traditional cigarettes.  The Harvard Report is quick to point out that vapers are exposing themselves to Diacetyl and Acetyl Propionyl along with Acetoin but forget to mention a very important point.  If you smoked before vaping you were already inhaling these chemical compounds in MUCH higher quantities.  As a real world comparison, the levels you would find in traditional cigarettes are so far below the “safe levels” or occupational limits set out by NOISH that the amounts found in vaping devices are negligible to say the least.  Unfortunately, as we have seen on many occasions, the public don’t look at numbers they just see scary words and freak out.  Don’t take my word for it,  most informed vapers know the name Dr. Farsalinos.  A proponent of vaping who is normally very quick to study the studies and he released his findings here.  In his report he noted:

In conclusion, the article is creating false impressions and exaggerates the potential risk from diacetyl and acetyl propionyl exposure through e-cigarettes. They failed to mention that these chemicals are present in tobacco cigarette smoke and violated a classical toxicological principle that the amount determines the toxicity and the risk.

While Dr. Farsalinos believes that manufacturers shouldn’t use these compounds in e-liquids, he believes that the discouraging smokers from vaping devices is much more hazardous to their health.  He states that this study is creating the impression that smokers are being exposed to compounds they have never encountered before, which in all honesty is misdirection. They will be bringing down their exposure even if they use the most Diacetyl ridden e-liquid currently being sold.

Vaping is harm reduction. As vapers, we choose to inhale something which we know to be 95% less harmful than cigarette smoke.  Many companies chose to remove the chemicals  mentioned in the study from their liquids and have had them tested to prove they are not present.  While I agree with the good Doctor that if a company still uses these ingredients that they should let their customers know, I would like to leave you with some questions:

If there has never been a single confirmed case of popcorn lung related to either cigarette smoking, where the levels are infinitely higher, or vaping why is everyone in such an uproar?  The entire time I smoked cigarettes, 2 packs a day for 22 years, I never heard of Diacetyl.  It wasn’t a problem for me because I had no scientists telling me I should be scared of it, they were to busy telling me about tar and other nasty things.

Is the fact that  research labs keep screaming that vaping is dangerous because of these flavorings simple fear mongering, as without this cause for concern they have no valid argument against the industry?