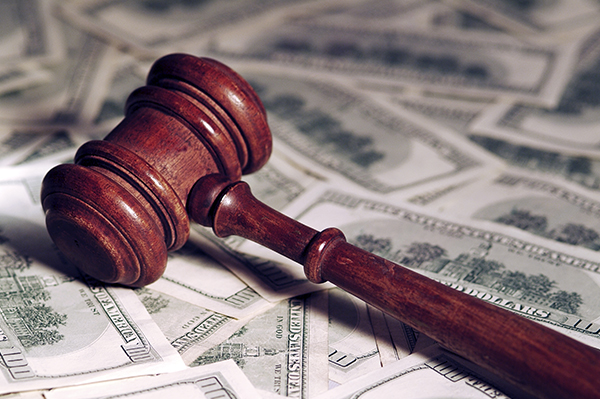 Five Pawns Subjected To  Multi Million Dollar Lawsuit. As the hammer of the FDA hangs heavy, poised to decimate an entire industry in the USA, there are many in the business of making e-liquid who believe that this is an inappropriate time to bring lawsuits against companies for selling what is deemed as unsafe.  While there are many view points on the use of Diacetyl and Acetyl Propionyl in anything designed for inhalation, the common consensus is that these chemicals can, over time, cause damage to the tissue of the lungs.  As a group who turned to a less harmful alternative to smoking, the thought of inhaling chemicals known to be dangerous is counter productive, the consumers want the safest possible solution to their problem.

In 2014, Five Pawns were made aware that the level of Diacetyl and Acetyl Propionyl in some of their e-liquid lines was well over what was considered “safe” levels by outside sources.  It is alleged that since then, instead of taking a stance to protect their consumers, the company sent out conflicting data and cease and desist orders to cover themselves.  It is widely believed that the company have spent the last year responding to customers telling them that they had a clean product, despite sitting on the fact that their e-liquid was potentially dangerous.  As a result of their inability to get in front of this before it became a problem, Five Pawns are now in the cross hairs of a multi million dollar class action lawsuit.  Wolf, Haldenstein, Adler, Freeman & Herz LLP  are the gargantuan law firm behind this action, on behalf of the vaping community.  With the wolves baying at the door, Five Pawns were offered a way out of culpability by way of a settlement, in the process helping out the advocacy side of the vaping community.  The company decided to dig in their heals and are now facing the battle of their lives.  They are up against a law firm that has battled Google and Apple in court and won, yet Five Pawns believe they can win.  Most of the key evidence against the company has come from their own mouths yet they believe they have a chance of winning.  While the number of plaintiffs in the case is currently minuscule,  the action covers any vaper in the USA.  This case is not about the fact that the e-liquids contain DA/AP, but essentially about the fact that the company have deliberately on many occasions intentionally mislead their consumers about the content of these compounds in their product.  There is no law against these compounds being in e-liquid, but when a company makes claims that their products are free of these chemicals and it is proven otherwise, that is when the problem begins.

The Backlash From The Lies

When it was discovered by a testing lab over seas that the levels of DA/AP were high, the company attempted to rebut with its own test results, dated almost a year earlier, that show lower levels of these chemicals.  The company had known that these compounds were present but had continued to sell snake oil.  As a result, the Electronic Cigarette Trade Association of Canada reportedly told 50 vendors to pull Five Pawns from their shelves as seen in the email below: 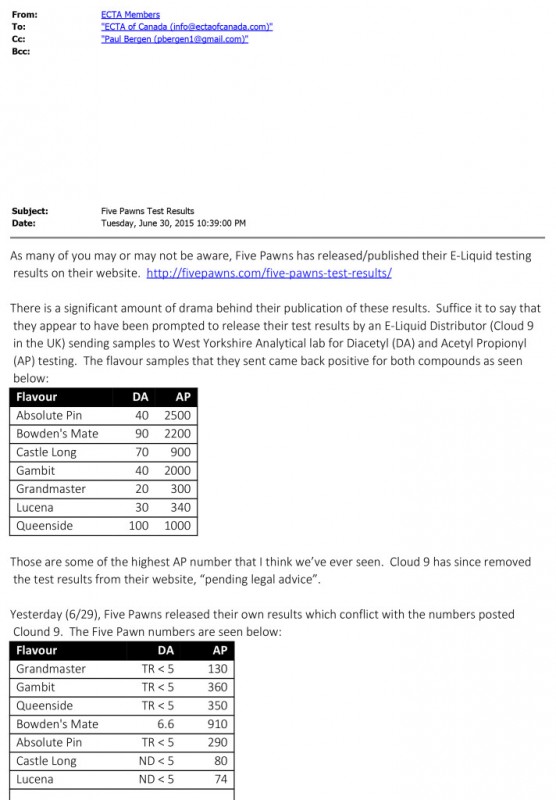 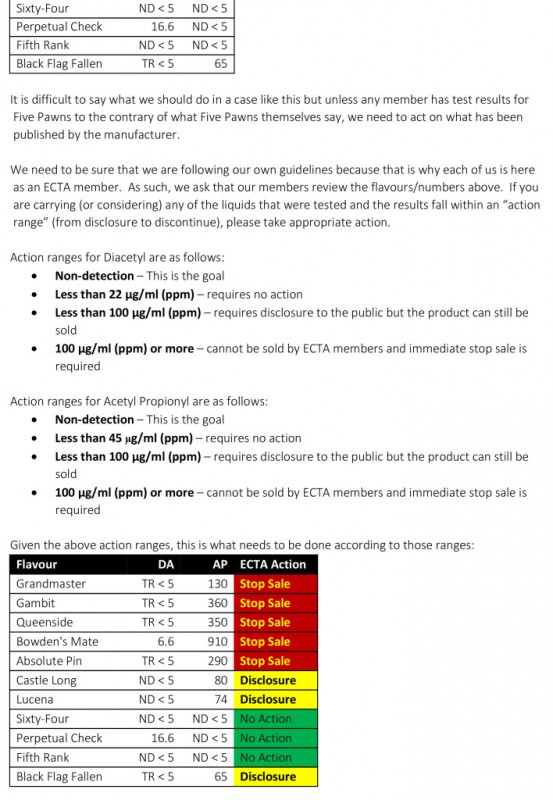 It is also reported that ECITA in the UK have followed suite, demanding that all e-liquids without valid test results be pulled from sale until such a time that the manufacturers can show exactly what is in the product they sell.

The Importance Of Honesty

As a manufacturer of e-liquids, your greatest tool is the fact that your customers have faith in your products.  While we currently have no legal requirement to tell the general public what they are inhaling, it is our job to protect them and more importantly give them honest information.  If your product contains a certain compound, make it known and allow your customers to decide for themselves if that is something that they wish to put into their bodies.  All manufacturers should have the faith in their products to have them tested in the first place, it shows your customers that you aren’t just in it for the money and that you care about the product you are selling.  Maybe if you are putting out a product that has questionable ingredients, rather than trying to hide them you should, in all honesty change them.

The Woe Of The Whistle Blower

As with any time a company is brought into question, the person who blew the whistle always catches the brunt of all the anger.  In this case Click, Bangs Russell Wishtart is currently catching the heat for his role in this story.  He may not be a plaintiff in this case but he is an integral part of the case against Five Pawns as it was his initial concern that set this in motion.  Currently on social media the vitriol aimed towards him is unreal, especially when you consider that the only reason he thought to set this action in motion was to protect the health of the very vapers who are currently calling for his slow and painful death.  While the timing of this lawsuit and all the publicity surrounding it are harmful to the industry as we await the FDA’s deeming regulation, we can not blame the whistle-blower for a companies inaction for over a year, this whole thing could have disappeared quietly and quickly.

As a community and an industry, I hear on a daily basis that we do not need government over site as we are more than able to self regulate.  As long as companies mislead consumers, whether by omission or out right deception we are proving to the Federal Government that we are both unwilling and unable to do the very things we claim we are working towards.  As an industry, we are responsible for the health and safety of our consumers and instead of taking pitchforks to the people who bring the problems to light, we should be focusing more on making potential future issues disappear before they become problematic.