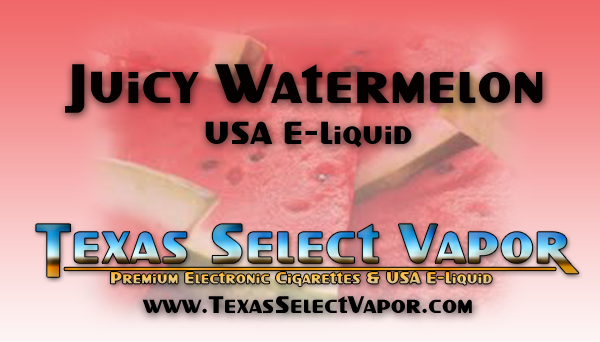 My husband Blake obviously gets to try out many different flavors of e-liquid from various sites around the Internet and one vendor that we’ve really taken a liking to is Texas Select Vapor. I’ve found that the e-liquid from TSV is very high quality and like many have said in the past about his e-liquid, it’s absolutely spot on. A good thing that I really like about TSV is that the majority of his e-liquids are clear, as I’m not one too big on dark colored liquid. Recently in a sample pack that we ordered from TexasSelectVapor.com, we received Juicy Watermelon.

At first, it was the quality in color of the e-liquid. In the past, I’ve vaped other watermelon e-liquids and the color was simular, but turned immediatly and after that the flavor changed a bit. I at first received a 3ml bottle of the juicy watermelon and I then made my second order and this time a 30ml. The quality of the color stayed the same and the taste never changed. To get into detail, the juicy watermelon flavor is like a watermelon jolly rancher, but there is a taste to it that really grabbed my attention. It had a lightness to the flavor, like some undertoned flavor to really give it that candy taste.

Brett from Texas Select Vapor really outdone himself with this flavor. I’ve tried many different flavors from him and I must say I like them all, but after the first taste of this juicy watermelon, I was in complete vape heaven. The vapor production was outstanding. Comparing to the other e-liquids I’ve tried from TSV, this juicy watermelon produces the most vapor. I’m much like my husband Blake, he likes more of a smooth throat hit and so do I. Having a big throat hit on some e-liquids is fine, but for most of my candy flavors, I rather not have any throat hit at all. The throat hit with juicy watermelon is very light and smooth and for me personally, it’s just right.

I encourage you all to try Juicy Watermelon from TexasSelectVapor.com – It’s delicious!