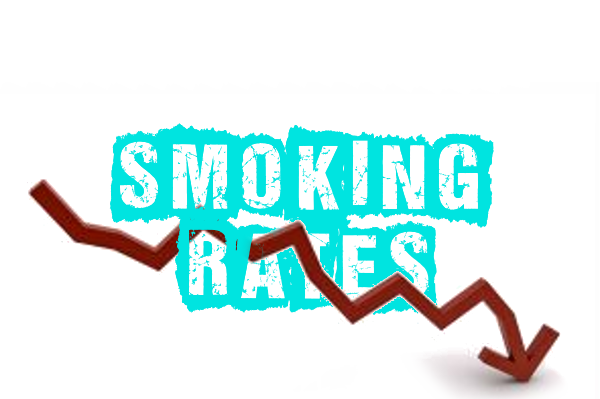 More American smokers than ever are quitting combustible tobacco in the form of cigarettes.  A few days ago, an article from the Daily Caller came across my desk titled  ” Gallup Poll Shows Smoking Rate Collapsing As E-Cigarette Use Soars ” with regards to a recent Gallup Poll  which can be found here.  While many other online resources were quick to jump on board and republish the findings, I decided to do my due diligence and delve deep into not only the poll but also the CDC data brief  mentioned in the article.  Regular readers will know that we ran an in-depth look at the data brief when it was released, but tied in with the Gallup Poll we can truly see a trend developing before us. 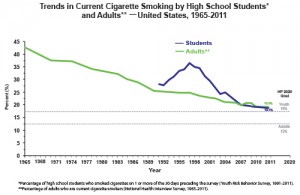 Every since the 1950’s the CDC has shown a downward trend in cigarette use.  Long gone are the days of the Tobacco Giants, many of the people reading this piece will be too young to remember the era of one in two people with a cigarette in their mouths.  Over the course of the last 60 years the slope of the Mad Men has been consistently on the decline in adult use and with the exception of a spike in the early 90’s it has been the same for our youth.  According to the CDC’s data sheets, since they began asking students in 1991 if they had smoked 1 or more cigarettes in the last 30 days, historically the numbers were slightly higher than their adult counterparts.  With teen experimentation this  is understandable, If we tell children not to do something it is the very first thing they do when we walk away.  Since the data measuring began, there are now fewer people in the USA smoking cigarettes, period.  There is no argument about that fact.

While there are many cheering about the low smoking rates, take into consideration that 20% is still 1 in 5 Americans that have lit a cigarette in the last week (that’s 66,000,000 people) and everyone wants them to abandon their nicotine addiction.  It is a massive win that the 18-29 age range, the next generation of smoker, now appears no more likely than those in the higher age bracket to smoke. This massive slump, a whopping 12% over 14 years has been partially attributed to people finding alternative sources of nicotine, such as what the poll calls ” smokeless tobacco”, but what we lovingly refer to as vaping.  We can argue all day long about the key talking points of the opposition to vaping, but one thing is clear, regardless of the view-point of the person making the argument.  Vaping is less harmful than smoking, period.  According to a 5 year British Government study, it is in reality 95-99.9%  safer, but that is a different story for a different day. 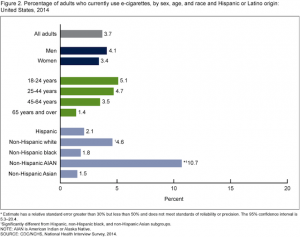 The fact is that as more people pick up Electronic nicotine Delivery Systems they are putting down traditional tobacco.  While the Gallup Poll attributes this to regulation and taxation on cigarettes, if they looked to the real world and asked the right questions they would find that in most cases these numbers are related to health.  The CDC’s  study decimated the view-point of those who are fighting against vaping as a gateway to cigarettes and future tobacco use.  The fact that this morning I read an article from the Director of the CDC making this very argument leads me to believe that they don’t even pay attention to their own studies.  We are seeing a trend:  the rise of E.N.D.S. as smoking continues to decline as the majority of those switching to vaping are doing so as a healthier life choice.  They still want their nicotine but not the associated plethora of risks and have found a way to achieve that goal.  Remember that contrary to popular misdirection, nicotine in itself is no more addictive nor harmful than caffeine in small doses.

Looking To The Future

If we leave smoking to decline at its historic levels, judging from the first graphic in this post, it will take approximately another half century to eradicate the use of tobacco.  There are those who would have you believe that E.N.D.S are at least as, if not more, harmful than traditional cigarettes.  Those people stand to gain from the continuation of smoking and its related problems ( which includes tobacco and pharmaceutical companies, medical researchers from many fields and the government) as each of them depend on the revenue it generates to stay in business.  As we applaud the drop in smoker rates, many of them are looking for new and improved ways to squeeze more cash out of the few that are left, which at the current rate gives them another 50 years of ever dwindling cash flow.  If we embrace the safer replacement technology, the high school children that we are constantly reminded of will never pick up a cigarette.  If we allow the FDA to implement its looming over site and ultimate decimation of this industry, those same children will not have an alternative, period.  The numbers will begin to rise once again and at the dawn of the next century our grandchildren will look back and wonder why we did nothing to stop it.