Believe it not, Guide To Vaping sources have stated that the Federal Bureau of Investigations (FBI) are now looking into the possibility that corruption may have played a role in the creation and passing of Indiana’s new vaping laws.  While we can’t verify an official investigation at this point, several sources have been in contact with the Federal Agency discussing this matter.

For those of you who aren’t aware of this new vaping law in Indiana, passed in 2015 by Governor Mike Pence and scheduled to roll out earlier this year, it basically hands control of the vaping industry within the Indiana State borders to a single security firm and which ever e-liquid providers they choose to represent, although according to the law-makers who proposed the bill in the first place, it is about health and safety in the manufacturing process.  In a pre-FDA regulation world, the State of Indiana took it upon itself to create some of the most egregious draconian rules that, stopping short of an outright ban on vapor products, placed the industry in an impossible stranglehold.  To be allowed to sell their products in the State, e-liquid manufacturers must be represented by a security firm that adheres to a very strict set of conditions, and apparently in the whole of North America only a single, local company is able to comply. Go figure… 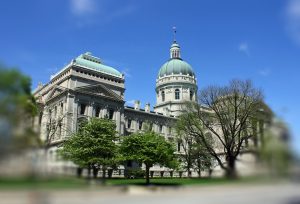 Was this a case of law-makers inadvertently creating a monopoly or was someone in violation of anti-trust and corruption laws?  Are we to believe that such a specific set of rules was created by accident or was this a deliberate act?  Questions that have been asked by the vaping community and the industry behind it, and now we hope by the Federal Government.  Our friends at the Indiana Business Journal spoke with several State Senators and law-makers about the alleged investigation and it seem’s while some will admit to speaking with a Federal Agent about the law, everyone including the FBI, will neither confirm or deny the existence of an investigation.

Whatever the case may be, Malhaupts Security is now sitting atop an empire within the State, its CEO is the only person who can grant access to other security companies by certifying their members and even then they have to wait at least a year to become compliant with other sections of the law.  The whole thing stinks of corruption and the people deserve answers.  If law-makers were duped into creating a monopoly, the people deserve to know who was involved in writing the bill and how it was able to get past so many educated people without them realizing what they were doing.  There is no way we can give everyone the benefit of the doubt, because someone knew exactly what they were doing and the last time we checked, breaking federal law and ignoring constitutional acts like the interstate commerce clause was a punishable offence.

The question shouldn’t be ‘is there a Federal investigation into this case’, the question should actually be how many representatives of the State were involved and when are they appearing in court.