It may be known as the Willy Wonka’s of the vaping world with more flavor combinations than most candy companies combined, but VaporFi takes putting its name on a vaping device very seriously.  The VOX line has been around for a while, but today we’re putting the VOX 80 watt TC Mod and VOX 40 watt TC Mod back-to-back so that you can quickly see exactly what the differences are —  outside of the names.  Kick back, relax, and let’s pull these devices apart, see which one best matches your needs, and find out where to get them in the process. 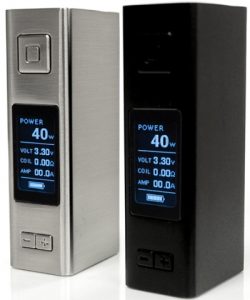 Measuring in at 35mm by 22mm by 77.5mm, the VOX 40 is not the smallest 40 watt vaping device on the market, but for its power output it contains one of the largest internal power sources.  A built-in 2200 mAh battery will allow you to vape between 1 and 40 watts using whichever 510 connected tank or RDA you choose.

Created from Zinc Alloy, it looks and feels solid.  From a design perspective, its minimalism adds to its character, the square flush fitted buttons surrounding the over-sized 0.96″ OLED screen creates an industrial feel to the device.  Hiding behind its tough exterior, however, is a powerhouse chipset that takes temperature control to task with ease.  Designed for accuracy and safety, the VOX 40 will fire coils made from Stainless Steel, Titanium or Nickel Ni200 — between 0.05Ω and 1.5Ω — anywhere between 100°C and 315°C – 200°F and 600°F — for longer lasting battery life and reduced risk of dry hits.

It’s not an overly complicated device, the menu systems are simple to use, and while it may not be the most inexpensive device on the market today, if VaporFi has put its name on the side you can guarantee they will back up their product with some of the best customer service in the industry. 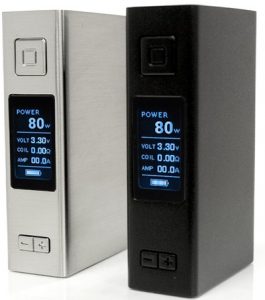 Measuring in at 50mm by 22mm by 82mm, at first glance the VaporFi VOX 80 doesn’t appear to be wildly different from its 40 watt companion.  Outward appearance, the look and the feel of the 2 devices are very similar, as they have the same minimalist industrial vibe.  The square button arrangement, the over-sized 0.96″ OLED screen and the brushed Zinc Alloy carries between the devices perfectly as you would expect from members of the  same family of mods.

The differences don’t become clear until you switch the device on and see the 80 watts appear on the screen, doubling the power output and exponentially increasing the size of the clouds it’s capable of producing.  Under the hood, the 2200mAh battery has been replaced with a behemoth 4000mAh power supply, one of the largest built-in batteries of any vaping device available today.

Temperature control functionality is comparable to it’s smaller sibling, Stainless Steel, Titanium and Nickel Ni200 options are available in the same temperature range.  However, with the extra battery life in the system you can effectively vape twice as long between charges.  Both devices can be charged via the micro-USB ports built into the frame, and the VOX 80 has an added option of pass-through vaping, meaning you can hit it while it’s attached to the wall.

Whether you go with the VaporFi VOX 40 Mod or VaporFi VOX 80 Mod, there are several things you should always remember.  You may not be getting the cheapest device currently on the market, but VaporFi will stand by its products.  Each one comes with a 30 day money back guarantee for online purchases, so if anything should go wrong or you just plain feel like you bought the wrong device, the company has your back.  Another thing to bear in mind with these devices as well, is the fact that if you upgrade to a starter kit VaporFi will give you some amazing tank options as well as instant access to some of the most sought after e-liquid in the United States.