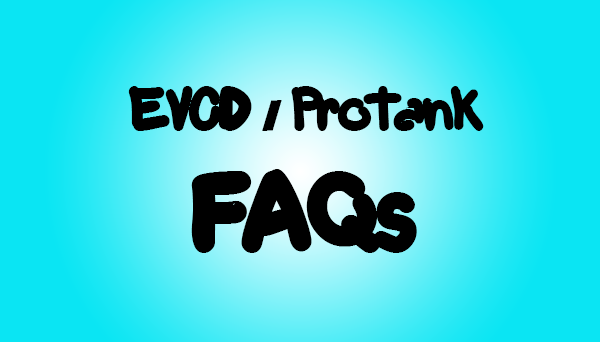 The EVOD and Protank is possibly the most popular bottom coil tank on the market right now. That said, SteamMonkey posted some very helpful information on /r/electronic_cigarette about compatibility, design, and materials – along with some other useful bits and pieces.

2. Evods are plastic bodies with a metal foil wrapper, the tank is NOT metal, if juice eats your plastic tanks, it might eat your evod.

3. Protanks and protank 2’s are glass.

4. Current iterations of the Unitank are plastic tanks, not glass. making a good thread on glass is hard, no there aren’t glass replacement tanks for the unitank. :p

5. The difference between the protank and protank 2 is primarily the replaceable glass and drip tip in the protank 2. The original protank has a built in drip tip that you can’t remove and the glass is integral to the device and can’t be removed. In the 2, the drip tip comes off and can take any standard 510 style drip tip. The glass is also a separate piece and can be replaced with colored glass or clear glass.

6. The Protank 3 is a departure from the standard. It has an entirely new head. It’s dual coil, but for all intents and purposes it’s identical. Not a lot of “innovation” there except that they made the coil chamber a little bigger which raised the deck for the little “stem” that goes into the airflow tube. This rendered it inoperable with existing devices. Protank 3 will most likely be followed by a Mini Protank 3, and I’d be willing to bet they’ll do a UNitank 2 or some shit that has the same head arrangement option.

7. The Evod and Mini Protanks (1, and 2) are Ego threaded, i.e. you MUST have the Ego threads on your device or via an adapter to use them.

8. Protanks, Protank 2, Unitank, Protank 3, all have standard 510 connectors. they’ll work on any 510 device that allows for bottom airflow.

9. The heads are rebuildable, they aren’t designed to be but they are.