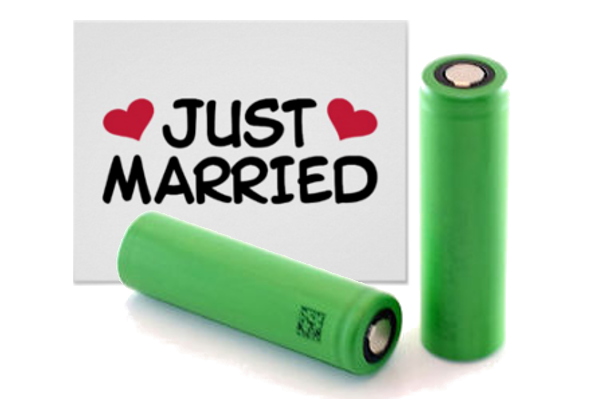 If you own any multiple battery box mod, chances are you have asked the question, how important are married batteries?  Over the next few minutes we will explore the concept of marrying batteries and see if we can get to the bottom of the question.  Don’t worry, we wont need a preacher or a shotgun, just a little information on the best way to ensure our batteries live long and healthy lives.  Kick back, relax and lets see if we can figure this out.

What Are Married Batteries

The concept of marrying batteries is by no means new, nor is it a vape specific issue.  If you are using more than one cell to power a device, having them paired makes sense. From birth until death, they should be charged and discharged side by side.  All you need is two batteries of the same make and model, purchased on the same day and you have yourself a married pair.  While it may not seem important, when you look at the chemistry and purpose of the batteries, working them as a partnership will ensure that they are capable of working for longer.

To keep this as simple as possible, whenever you put a battery into a circuit you are actually asking for a chemical reaction to occur.  The battery is made up of cells, each having a positive and negative terminal immersed in an electrolyte solution.  When a circuit is completed, the positive and negatively charged ions in the solution want to move to the anode (negative side) or cathode (positive side).  It is the movement of these ion’s that allows energy to flow to an external device, in this case your vape.  Every time you charge the battery, you are in essence returning the ions to their original position in the electrolyte solution, ready to rush the terminals again.  Over time a small amount of the energy is lost in the process, which is why ultimately the battery will have to be replaced as nothing lasts forever.

We can only store so much energy into a finite space.  As we have demanded more from our devices, we have asked for more power.  The simplest way to increase the power that can be delivered is by adding more batteries.  As you introduce more batteries, and cells, into the equation there are certain things you have to bear in mind.  As we are now working with chemical reactions from different sources, we need a way to ensure that the reactions are occurring at a similar pace.  If one battery is close to the end of its life cycle, it will cause the newer battery to work harder, doing not only its own job but also covering the slack from its partner.  If both cells are equal, they will continue to work at the same pace throughout their lives.

The Power Of Series

This is especially important in a series box mod, as  while the amp limit remains the same the voltage passed through the circuit is greatly increased.  The first battery in the series will take the greatest pounding, as it is passing through its own charge and the charge of the battery behind it. If the first battery in your series has less of a charge than the other, you will be working it harder to get the same effect, reducing its life span.  By having 2 cells that are identical in wear and tear, you reduce the risk of this happening.  Another way to keep them in harmony is to rotate the batteries with each use, putting the back to the front with each change.

By marrying your batteries you will ensure that they last longer as you won’t have one battery doing the work of two.  The way I think of it, I wouldn’t want to spend all day picking up the slack for a tired old friend when I could have had an equal partner to begin with.  If you keep your batteries happy, they will keep you consistently vaping for as long as their life cycle allows.