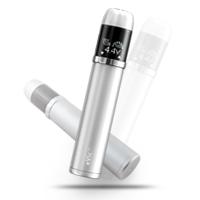 If you’ve wanted to take the next step and move into the world of mods, now is probably going to be your best time to do so.

With so many devices being poured into the e-cig market, it’s lowered the value of mods. – And not to mention the amount of vendors that are throwing out deals left and right to beat the next mom and pop shop. The e-cigarette market is no different from the cell phone market… each time a new device comes out, it receives a lot of hype, but is short-lived. Why? Because another new device is just around the corner readying to be released. Just remember this, today’s most popular and loved mod will quickly become yesterdays news. So, choose wisely by purchasing a mod that can grow with you as a vaper.

The Joyetech eGo-C Twist provides the comfort of being small and very pocket friendly. It can be used with the majority of todays tanks being that most manufacturers are making accessories with the eGo type threading. In particular, the eGo-C Twist can supply low voltage power, but also has the ability to be adjusted to higher voltage, peaking at about 4.8 volts.

The Joyetech eVic is a much larger mod, but also uses the common 18650, which is known for lasting long periods of time before needing a recharge. The device will grow with you as a vaper being that it can connect to the PC and has the ability to receive updates, improving the software that already exists on the device. It can perform at both low and high voltage, as well as having many options, such as both variable voltage and variable wattage. Included, changing the appearance of the device is easy since many e-cig companies sell different colored battery housings.

Mods obviously aren’t for everyone, but for those who don’t mind the much larger size will rake in the benefits from them. They last longer between charges, have many more options and supply enough power to satisfy any vapers needs. Though stick e-cigs cover the majority of the market, you can expect in the near future that mods will exceed them. New technology is constantly being introduced to this small but quickly growing industry and as time continues, you’ll start seeing more devices use that technology.

It’s not always the high power that everyone looks for, it’s the long-lasting battery. I’m sure if everyone could have a small mod with the same battery lifetime, small is what would be chosen. And then, there is also high power devices. Because of the larger battery, devices can produce more power at lengthier times.

Mods: Does it mean more vapor?

A lot of vapor doesn’t necessarily mean you must have a mod. Though having a mod with higher voltage output does help, there are many factors that go into receiving more vapor production from your device. For more information on vapor production, read the article “The Truth Behind Vapor Production“.

Moving into the world of mods, you’ll learn many things and be opened into a whole different ball game. The market selection is massive with mods and the ability to be different and customized is almost endless. There are many opportunities when exploring mods and it’s your job to experience them.