Most vapers don’t realize it, but we have a tendency to talk in our own language.  Yesterday, I was in a local vape shop with a recently quit smoker, and I was helping them to decide on which tank to buy.  Several minutes into the conversation, I noticed his eyes roll back into his head and a glazed look came across his face — don’t worry he wasn’t having medical issues.  However, I realized that he had no idea what I was talking about, so we took it back a notch and went to the most basic of basics and he asked the question:

What is the difference between an RTA and RDTA?

The difference between a dripper and a tank is easy to spot from a mile away.  Normally one is made of metal and glass, and the other is made almost entirely of metal.  The differences between RDTA’s and RTA’s can be a lot subtler.  Even though, according to a lot of vapers, the RDTA is actually a unicorn and nothing more than a mythical creature, there are a few devices on the market now that can be properly classified as one.  Let’s figure out what these letters mean and what, if any, the differences between them actually are.

An RTA is a Rebuildable Tank Atomizer, and is actually the name of the build deck that is now commonly available with most new tanks on the market.  If you can build your own coils in your favorite tank, instead of buying pre-made coils from a factory, you own an RTA.  It is designed to be placed inside of the chamber of a tank, suck e-liquid in from the outside, and give you plenty of vape time for the least cost.  A spool of wire and a bag of organic Japanese cotton goes a lot further than the same number of coils you can buy for that price.

An RDTA, or Rebuildable Dripping Tank Atomizer, is a different beast for several reasons.  To qualify as an RDTA it has to offer a tanks convenience with the ability to still be used as a dripper.  If you have to take the device apart to reach the coils, other than removing the top cap (like a dripper), it does not qualify for this category.  Devices like the Thereom by Wismec and the Avocado 24 by GeekVape, even though they do not claim to be RDTA’s, perfectly fit into this niche. 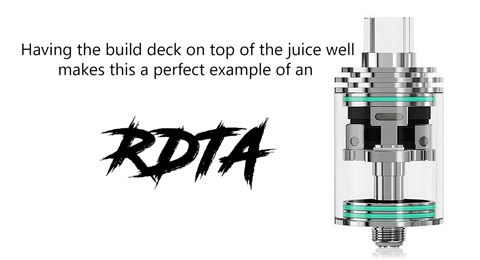 When looking at either of these tanks, you remove the top cap and are immediately in contact with the coil systems.  At the same time, they offer the convenience of a tank because they store a vast amount of e-liquid beneath the deck.  What is confusing for many new vapers is the simple fact that most companies who’s products fit into this category refuse to classify them as such.

From a personal standpoint, I prefer to use RDTA’s over tanks.  After spending so long dripping, the thought of having to work on a tiny deck that is going to be entombed before I fill it with liquid scares me.  What happens when you put everything together and get an unintended malfunction?  With an RDTA, you just pull of the top cap and fix the coil, put it back on and you’re vaping again.  If you are using a tank, you’ll probably just finish draining the e-liquid in the same amount of time.