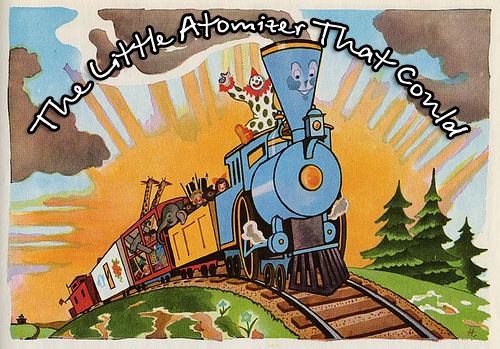 Atomizers are the holy grail of vaping, they always have been and always will be. They have the best taste, offer the best throat hit and they’re the most simplistic of heating elements for vaping. No filler material, just a straight and direct dose of the best e-liquid goodness.

Though atomizers are great in many ways for vaping, they do have a few setbacks. Not only do you have to constantly drip another few drops just to keep puffing, but what you drip… also drops. Leaking has been a big issue for atomizers since day one and it’s the reason why they’ve had to invent a special ‘drip shield’ just for that reason. Wait, I’m not done – On top of it all, some atomizers don’t even give you a small two weeks of use. To some of you more veteran vapers, I’m not telling you anything new, you’ve used them and a lot of you may have even moved onto another type of heating element used in vaping, like a cartomizer.

With all that being said, what if it wasn’t like that – what if you didn’t have to deal with those common issues… What if you had the little atomizer that could?

A long time friend of mine named Brett – from TutorialBasement.com (you know him as the guy that makes the fancy images for GTV – like our logo), he kept telling me every time I would talk to him over a course of a month that he’s never had an atomizer taste so clean, so crisp and one that could last so long as the one he was currently using. I thought nothing of it. Two months roll by and still, every time I spoke with him about vaping, he would boast about his atomizer that just doesn’t seem to give up.

To give you a little info on this story, he received this atomizer from a vendor because the last one he ordered was dead on arrival. The atomizer is a 1.8ohm LR. There was nothing done to the atomizer, nothing special about it, just a normal Joyetech brand.

“I honestly didn’t even think nothing of it at first. As time went on, I just realized I haven’t bought an atomizer or needed to change it like I usually had to. At this point of 3 months using this same atomizer, I was surprised that it still had a great taste and amazed that it’s still working just like it was the day I first started using it.” – says Brett.

Another two months go by and he’s still using the same atomizer. He claims the taste is still great, no clogging – so the airflow is fine, and still producing big clouds.

“I was going through an atomizer every couple of weeks max. I still don’t get how this atomizer is working so well after this long.”

I’m not sure if Brett just has a bit of vape luck or what, but an atomizer to not only work after five months, but for it to still have a great taste and vape well has me baffled. Brett’s still using the very same Joyetech 1.8ohm LR atomizer to this day.

Have you had an atomizer or cartomizer last for you longer than normal? – Tell us your story below in the comments section.