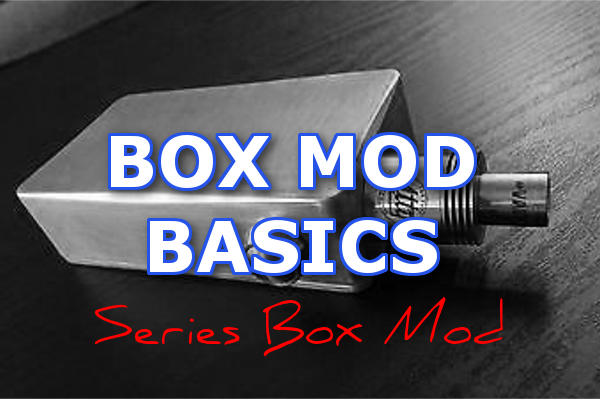 In this addition to Box Mod Basics, we’re going to answer a question that’s become more common – how does a series vape mod work? – In today’s article we’re going to open one up – or at least look at the basic concept of the series vape mod and how it all works.  Second in our new Intermediate category of “Box Mod Basics” articles, where we look at the different types of unregulated devices on the market today.  We hope that you can use this information to better understand the devices you are using and potentially use the knowledge to help build your own in the future. 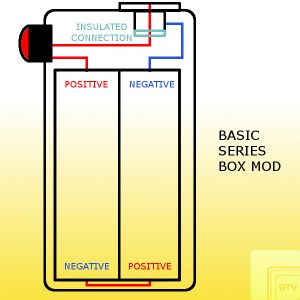 What Is A Series Vape Mod

Series devices are probably the most common of any battery-powered device, from the T.V remote to the majority of flashlights, they put batteries in series to up the voltage at the cost of battery life.  The principal of the series vape mod is exactly the same.

If you look at the diagram, the way that the batteries are set up allows the electricity to flow freely throughout the entire circuit.  When the switch is pressed, it opens up the floodgates for electrons to run through to the 510 connector and make a vaper very happy.

The positive connection of one battery feeds into the negative side of the other, effectively pushing the power from the second battery through it, making this a continuous or series circuit.  If one battery is removed from the equation, the entire system will cease to function.

The unregulated series vape mod is set up to allow the user to harness the maximum amount of voltage delivered from the power sources – around 8 volts on a full charge – but it does not increase the amount of amperage that the batteries can handle.

How Does A Series Vape Mod Work

The unregulated series vape mod is for vapers who do not wish to build at super sub-ohm levels and prefer to build coils with as much surface area as possible.  The series system basically creates a “slave and master” system inside the sled, with the second battery in the

The series system basically creates a “slave and master” system inside the sled, with the second battery in the circuit doing pretty much all the work while the first just sits there and lets everything happen.  It is important that you use batteries that are the same age and have only been used together in the same circuit to ensure that you are never putting too much strain on one particular battery and that they are switched out between position one and two with each use.  By marrying the batteries, you will ensure that you get the maximum life out of both cells, rather than having a brand new one trying to pull power from an almost expired battery and working itself to death.

By increasing the voltage, you are basically allowing more power to pass through the coils, therefore getting the same results as super sub-ohm without the fear of having the batteries close to the venting point.  Although the batteries won’t last as long as a parallel build, the series certainly has the potential to deliver much bigger clouds with much less ramp up time.

The potential for things to go wrong with an unregulated series vape mod is always present.  Unless you are an electrical engineer by trade, you should not think that this is a device you can just pick up and run with.  You need to be aware of Ohms Law, battery safety and the true limits of your batteries before you can even think about running an unregulated device of any kind.  If you have never seen a battery vent, either alone or in a series circuit

If you have never seen a battery vent, either alone or in a series circuit, you don’t want it to happen because you didn’t take the time to learn how to keep yourself safe.

Even though the device in the diagram is the most simple and basic that I could describe, most people do not truly run an unregulated device of any kind.  In series devices, they will run potentiometers to adjust the voltage manually and a MOSFET (or metal-oxide semiconductor field-effect transistor) to protect their switch from melting.