For those of you that don’t remember, this is the company and the device that won the best new mod award in Guide To Vaping’s Best of 2011 Poll . Now its like every where you go, rather it be hangouts, vape networks or social networks, almost everyone has a LavaTube. The LavaTube sent shock waves around the online vaping community and I think its become apparent that all the hype over the device wasn’t just a one time deal. With this second version, the Chrome Lavatube, I’m sure it’s safe to say that the LavaTube has made its mark and… it’s here to stay.

As you seen in my last LavaTube review, I was amazed at how much you get for the price. I mean come on, this thing gives you the option to choose what voltage you want to vape at and tells you how much battery you have left. (Hellooo, perfect device!!) – Since then, I’ve been nothing short of happy with the first version LavaTube. It served its purpose great, but I did have a bit of trouble with two things. The internals for the button was flawed on my device making it miss-fire and the second issue was the bottom cap. The bottom cap was plastic and didn’t want to stay on. BUT, that was the past and the first version has now carried me on to the next version of the LavaTube, which is the Chrome. 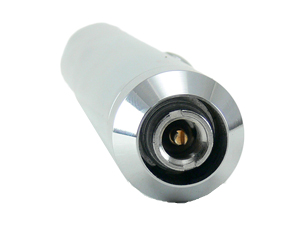 The Chrome LavaTube or LT houses the same internals as the first version and is made by the same manufacturer “L-Rider”. So, if the internals are the same and the same manufacturer is being used, what’s so different? – The Chrome LT is quite a bit heavier than the original – sitting at 5.95 ounces including a battery, – a whole 2.5 ounces heavier than the original LavaTube. The added weight is a bit more noticeable in your pocket, but gives a better feel of quality when in use. The bottom cap is all one metal piece and the top is different from the original, sporting an eGo connector, replacing the normal 510 connection. This means that this version LavaTube is compatible with all eGo and 510 accessories. Also, sitting inside the ego connector is a spring-loaded center pin, which is supposed to eliminate atomizer and cartomizer compatability issues that you see on many devices. The outer appearance of the chrome certinly looks more appealing and the performance is sure to match.

Although the Chrome LavaTube has the same internals as the original, you can tell quite a bit of a difference just from the design in air flow. The Chrome LT is a bit more ‘airy’ and it definitely shows when you blow out plumes of vapor.

Price: Just a small $10 more than the original, the Chrome LavaTube is $79.00 for just the device. The full kit being $109.99, which comes with all the basics, charger, battery, atomizer, drip tip and the device itself.

Overall: The LavaTube is still hands down my favorite all day device. Going from the first version to my now upgraded version, I’m nothing more than amazed as I’ve always been. The LavaTube doesn’t promise to be an end all device, but I can tell you first hand, it’ll damn sure do its job and… it’ll do it well.

If you’re interested in the Chrome LavaTube or want to check out other products by Volcano, Please visit www.VolcanoEcigs.com