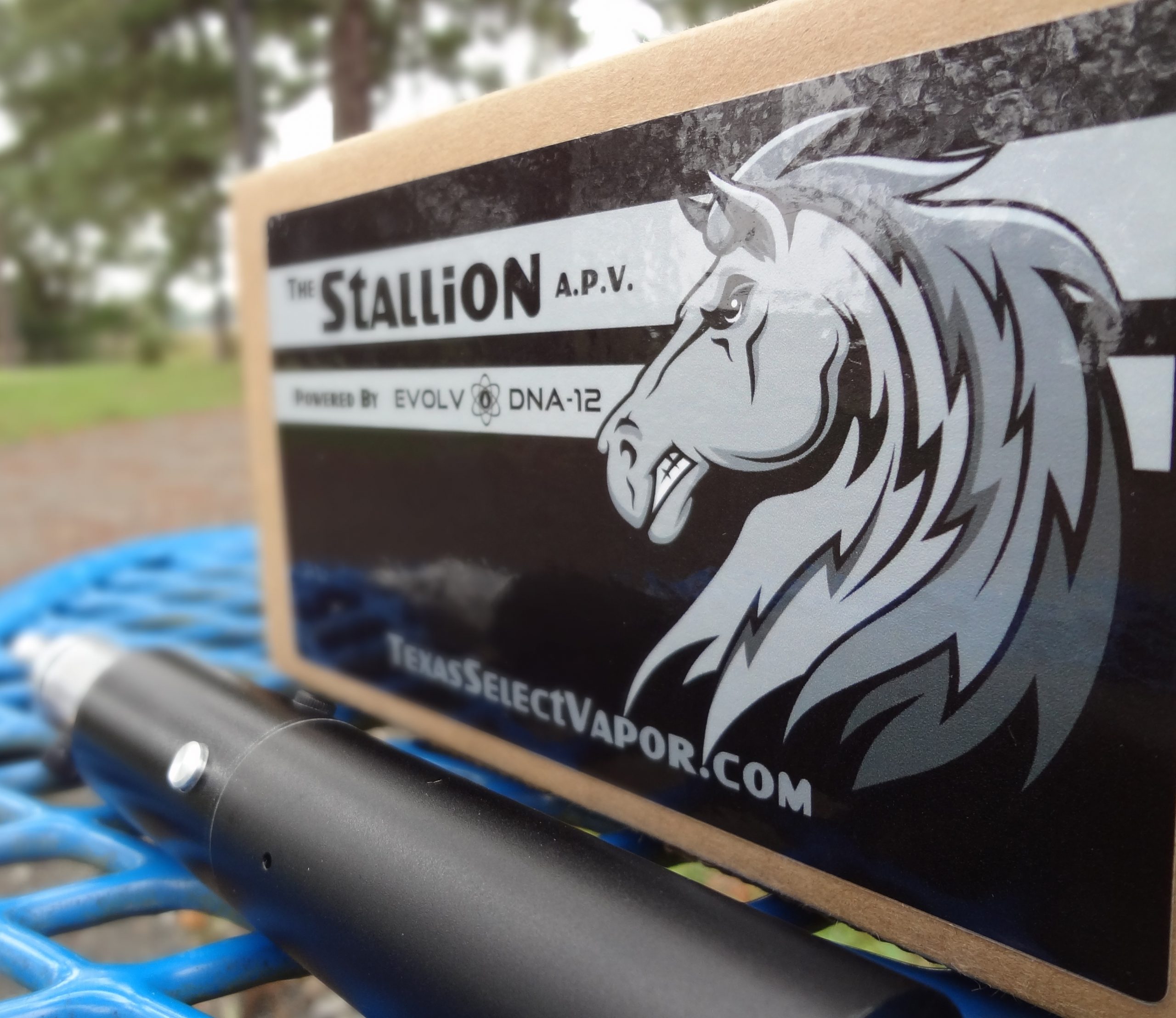 The Stallion Advanced Personal Vaporizer is a 22650 power regulated device. The Stallion is made and sold by Texas Select Vapor. This will be a two-part video and written review. The video is a run down of the Stallion, while the written review will hold the overall details of the device.

Appearance: The Stallion has a very solid appearance and the overall feel of the device corresponds. The body is made of T6061 Aluminum and is covered with a black/silver Hard Coat Anodize that has a very light textured look and feel. The device splits into two sections, the head being where the custom machined 510 connection, 1/16th inch depth drip well, custom machined T6061 Aluminum fire button, potentiometer wheel and Evolv DNA Board are held. The bottom section of the Stallion is the tube part of the device which holds the single 22650 IMR battery and Phosphorus Copper “Hot Spring”. Also located on the bottom section of the Stallion is a single vent hole which sits .5″ below where the two half’s combine. A second vent hole is in an inset and surrounded by the engraved Texas Select Vapor name located at the very bottom of the device. The Stallion is 8.25″ in length and 1.05″ in width and weighs 5.50z with the 22650 battery and 3.15oz without. 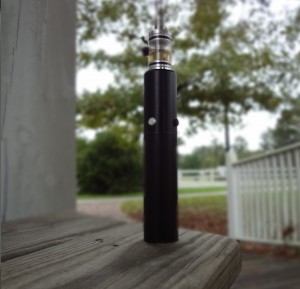 Function: The Stallion APV holds a single 22650 IMR battery and can also be used with a single 18650 IMR battery (without rattle!). The inner workings of the Stallion which delivers the power is an Evolv DNA Board. The Evolv DNA Power Regulated module has the ability to adjust from 5 watts to 12 watts (figures are not exact) by means of a potentiometer.  The Evolv DNA board is essentially a newer version of the same technology Evolv puts into the Darwin and operates similarly to the Evolv Kick (5 thru 10 watts range drop-in module). 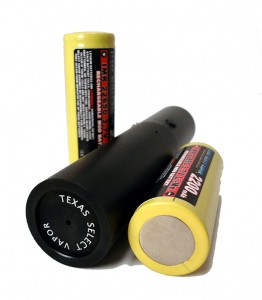 The user chooses a watts level, the DNA board reads the atty/carto Ohms and automatically adjusts the volts and amps (hundreds, perhaps thousands, of times each second) to maintain the user chosen watts level to provide the most consistent vape experience obtainable. There are now literally thousands of Evolv’s Darwins and Evolv Kicks on the market and many websites to read more about this technology.

The Evolv DNA board boosts and Regulates Power, using the technology in the module, and this boost requires additional amps to function. Thus, the High Drain battery is a necessity and listed as a requirement on the Evolv website. Brett (owner of Texas Select Vapor) has chosen a 22650, 2200mAh, 3.7V Li-Mn High Drain battery that is included in the Stallion APV Kit. The large battery size has the potential to last from 1 to 2 days even with the heaviest of vapers.

Other safety features included in the Evolv DNA board include (from Evolv website):
Overcurrent (short-circuit protection), over and under voltage protection and a thermal shutdown. 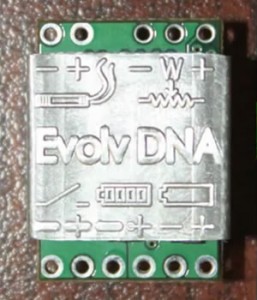 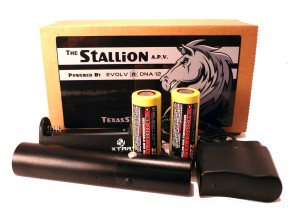 Opinion: The Stallion APV is an overall well-rounded and durable device. The power that the Stallion produces is quite outstanding and is by far anything that I’m used to. I’ve found a new love for this technology packed power regulated APV and have grown a large sense of respect for the maker (Evolv Vapor) that allowed this device to be what it is (DNA Powered). Before actually receiving the device, I was a bit skeptical on the size of the battery that is used with the Stallion, but upon receiving the device, all the skepticism has vanished due to the size of the Stallion not being that much larger than other popular devices I was used to using. 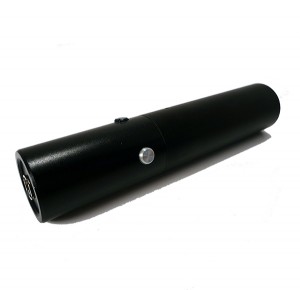 One thing that really stands out to me about the Stallion APV is that not only can I use the 22650 battery size that is intended, but it also has the ability to use an 18650 battery without any rattle in the device. This is able because of the strong bottom spring where the battery rests on inside the bottom half of the device. Another thing that I’ve now come accustomed to is not having a fancy screen, nor having to change voltage when I switch from my 801 Fuzion Cartomizer to my 510 2.0ohm Boge Cartomizer. The ability to set the wattage to that sweet spot and leave it is pretty comforting.

Knowing the Stallion has two perfectly placed vent holes will ease the mind, not to mention the DNA Board safety features. The Stallion is only just a bit larger than the device I normally use, which is the LavaTube. Also including in the comparison, the Stallion feels a bit lighter even with its larger 22650 battery. I like the inclusion of the drip well, however… its inset doesn’t seem like much.

The fire button presses in easily and is very clicky along with feeling okay to the thumb. It reminds me of the Bombshell Mod’s button which I found to be very nice because of its small size. The threads which combine the two halfs of the device are smooth and pretty close to the ‘butter’ feel. My device arrived with Noalox already applied on the threads. The threads in the 510 connection feels smooth and in sync, unlike other devices I have used in the past which had almost too much ‘play’. The potentiometer is small in size and easy to adjust, yet at the same time it’s firm enough to stay put. The Stallion itself feels good to the hand, has a nice girthy feel and has the power to back it.

I’ve owned and used the Stallion for almost 2 weeks to this date and it is honestly the most powerful and consistent vape I’ve had out of my almost two years of vaping. Including, the Stallion is the longest lasting (in terms of battery) PV I’ve ever used. I highly recommend the Stallion APV and if you would like to purchase the Stallion APV or would like to see other products from Texas Select Vapor, please visit www.TexasSelectVapor.com

I appreciate Texas Select Vapor for giving me the opportunity to be the first to review this awesome APV and I hope all of you have enjoyed the video and article part of the Stallion APV Review. If you have any questions, please feel free to comment at the bottom of this article. 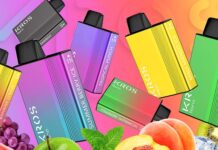 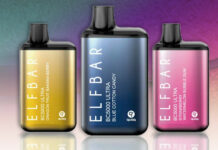 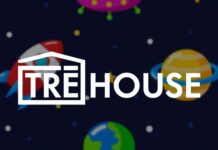